Though for the 1990 to 2010 U.S. censuses the CDP was entirely located within Middle Township, a small section at the southern edge of the community, located in Lower Township, is sometimes called Rio Grande. For the 2020 U.S. Census the boundary was redrawn so that portions of Lower Township were included in the Rio Grande CDP.

It is part of the Ocean City Metropolitan Statistical Area. As of the 2010 United States Census, the CDP's population was 2,670.

According to Jeffrey M. Dorwart, Rio Grande was founded in the mid-nineteenth century around a country store owned by the Hildreth family. The community was originally called Hildreth for that reason.

George F. Boyer and J. Pearson Cunningham explain that, during the colonial period, Aaron Leaming, the Hildreths and the Cresses had plantations in that area. Where the King's Highway crossed the road coming from Dennisville and Goshen a stage coach terminal was set up, and the spot became the center for trade for the local farming families. Boyer and Cunningham say that the area was known as "Leamings," for the prominent landholders, or as "Hildreth," the family who ran the local store. (p. 121-122) They continue, "The name, Rio Grande, was suggested by the seventh Aaron Leaming who thought this southern United States river had an attractive sound." 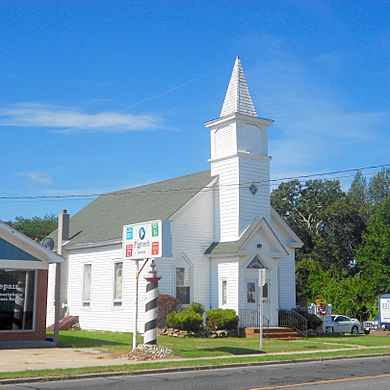 The climate in this area is characterized by hot, humid summers and generally mild to cool winters. According to the Köppen Climate Classification system, Rio Grande has a humid subtropical climate, abbreviated "Cfa" on climate maps.

Rio Grande is situated at the junction of U.S. Route 9 and Route 47. U.S. Route 9 runs south to Cape May and north toward the Atlantic City area while Route 47 runs southeast to Wildwood and north to Millville and the Camden area. Rio Grande is accessible from the Garden State Parkway at exit 4 northbound and exit 4B southbound.

NJ Transit offers bus service from Rio Grande to Cape May and Philadelphia on the 313, 315 and 316 (seasonal only) routes, to Cape May and the Port Authority Bus Terminal in Midtown Manhattan on the 319 route, to Wildwood on the 510 route, and to Cape May and Atlantic City on the 552 route.

The Great American Trolley Company operates trolley service from North Wildwood and Wildwood to shopping centers in Rio Grande on Mondays through Fridays in the summer months.

Cape May Airport, established in 1941 as NAS Rio Grande, is located in the area, in adjacent Lower Township.

The areas within Lower Township are in the Lower Township School District for elementary grades and the Lower Cape May Regional School District for secondary grades. The elementary school district operates Douglass School (PreK and Kindergarten) in Villas CDP and three schools in Cold Spring: Mitnick School (1-2), Abrams School (3-4), and Sandman School (5-6). The secondary school district Teitelman Middle School and Lower Cape May Regional High School in the Erma area.

People who were born in, residents of, or otherwise closely associated with Rio Grande include:

All content from Kiddle encyclopedia articles (including the article images and facts) can be freely used under Attribution-ShareAlike license, unless stated otherwise. Cite this article:
Rio Grande, New Jersey Facts for Kids. Kiddle Encyclopedia.