Cape May Court House is an unincorporated community and census-designated place (CDP) located within Middle Township in Cape May County, New Jersey, United States. It is part of the Ocean City Metropolitan Statistical Area. As of the 2010 United States Census, the CDP's population was 5,338. It is the county seat of Cape May County and serves as the principal administrative hub for the township.

Cape May Court House was laid out in 1703 by Jeremiah Hand and was first called Rumney Marsh and afterward Middleton before the adoption of its present name. The Court of Cape May County met in private homes and the First Baptist Church until 1764, when Daniel Hand set 1-acre (4,000 m2) of his own property to construct a court house and jail. It was replaced by the current structure in 1849. 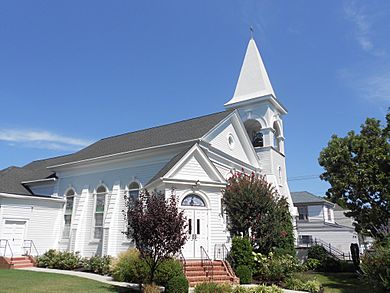 First United Methodist Church, next to the old courthouse

The Cape May County Park & Zoo in Cape May Court House provides free year-round admission to a collection of over 550 animals representing 250 species in 85 acres of exhibits. The zoo is located in the center of Cape May County's Central Park, and together the zoo and the park cover about 220 acres. The zoo began operation in 1978. Its principal exhibit areas are a 57-acre African Savanna, a free-flight aviary, and a reptile collection. 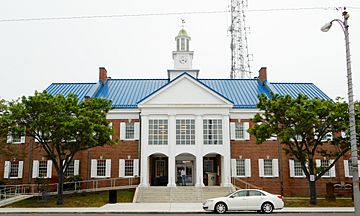 There is a private Christian K-12 school in Middle Township, Cape Christian Academy. It is in the CMCH CDP and has a CMCH postal address. Richard Degener of the Press of Atlantic City described it as being in Burleigh.

Church Street Christian School, 18 months to preschool, is on the property of its sponsor, First United Methodist Church. It was formerly a Montessori school.

Cape May County Library has its Cape May Court House branch in the CDP.

People who were born in, residents of, or otherwise closely associated with Cape May Court House include:

All content from Kiddle encyclopedia articles (including the article images and facts) can be freely used under Attribution-ShareAlike license, unless stated otherwise. Cite this article:
Cape May Court House, New Jersey Facts for Kids. Kiddle Encyclopedia.