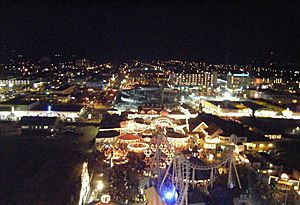 Cape May County is the southernmost county in the U.S. state of New Jersey. As of the 2016 Census estimate, the county's population was 94,430, making it the state's second-smallest county, a 2.9% decrease from the 97,265 enumerated at the 2010 United States Census, in turn decreasing by 5,061 (-4.9%) from the 102,326 counted in the 2000 Census. Cape May was one of only two counties to lose population in the decade since 2000; the decline was the largest percentage decrease of any county statewide and the second-largest in absolute terms. A consistently popular summer destination with 30 miles (48 km) of beaches, Cape May attracts vacationers from New Jersey and surrounding states, with the summer population exceeding 800,000. Tourism generates annual revenues of $5.3 billion, making it the county's single largest industry, with leisure and hospitality being Cape May's largest employment category.

The county is part of the Ocean City, NJ Metropolitan Statistical Area as well as the Philadelphia-Reading-Camden, PA-NJ-DE-MD Combined Statistical Area. Its county seat is the Cape May Court House section of Middle Township.

The county was named for Cornelius Jacobsen Mey, a Dutch captain who explored and charted the area from 1611 to 1614, and established a claim for the province of New Netherland.

Most of the county lies on a peninsula that juts into Delaware Bay. It is flat and coastal. Sea level is the lowest point; the highest elevation is found at three areas in Belleplain State Forest in the county's northern corner which are approximately 60 feet (18 m) above sea level.

¹ across Delaware Bay; no land border

Given its maritime influence and southernmost location within New Jersey, Cape May County has relatively mild wintertime temperatures, with very windy conditions more than half of the year, mostly in June and July. Conversely, the county witnesses lower summertime temperatures than most places in the state, making it a popular place to escape the heat as well. It is in USDA plant hardiness zone 7a/7b, Humid/Temperate. Its climate is suited to growing traditional Northeastern plants, including English Yew, Boxwoods and Sugar Maples. Because of the warmer wintertime temperatures, Hardy Palms, including Trachycarpus fortunei (Chinese Windmill Palm) and Needle Palms, would work quite well in the landscape, these plants having survived for many years also in other parts of coastal New Jersey, from Sandy Hook to Cape May. Wine grapes also do particularly well, given the long growing season. The wine industry is growing – four vineyards and wineries operate in the county now – three more are planted and on the way. The county had a once-vibrant lima bean industry that covered as much as 5,000 acres (2,000 ha) of land and West Cape May still calls itself the "lima bean capital of the world" and hosts an annual lima bean festival, though wine grapes are quickly becoming more common and many wineries dot the landscape.

According to the Köppen climate classification system, Cape May has a humid subtropical climate (Cfa) typical of New Jersey with warm, windy summers and cold winters.

There were 40,812 households out of which 21.6% had children under the age of 18 living with them, 48.3% were married couples living together, 11% had a female householder with no husband present, and 36.4% were non-families. 31.2% of all households were made up of individuals, and 15.5% had someone living alone who was 65 years of age or older. The average household size was 2.32 and the average family size was 2.89. 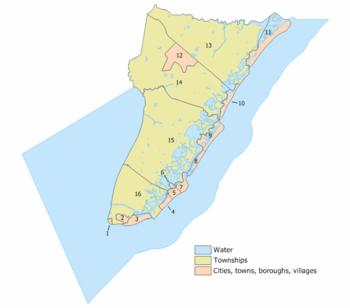 Municipalities in Cape May County (with 2010 Census data for population, housing units and area; along with communities within each municipalities for which census designated places are noted with their population) are:

The southern terminus of the Garden State Parkway, known as Exit Zero, is in the county. The parkway passes through the length of the county, heading north to Egg Harbor Township in the north in Atlantic County.

All content from Kiddle encyclopedia articles (including the article images and facts) can be freely used under Attribution-ShareAlike license, unless stated otherwise. Cite this article:
Cape May County, New Jersey Facts for Kids. Kiddle Encyclopedia.