Pituophis melanoleucus, commonly known as the pine snake, is a species of nonvenomous snake in the family Colubridae. The species is endemic to the southeastern United States. Three subspecies are currently recognized as being valid. 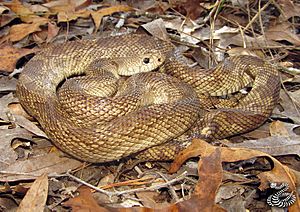 The subspecific name lodingi is in honor of Danish-born amateur herpetologist Peder Henry Löding (1869-1942), who lived in Alabama. 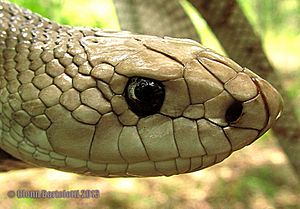 The species P. melanoleucus is found in the United States in Alabama, Florida, Georgia, Kentucky, Louisiana, Mississippi, New Jersey, North Carolina, South Carolina, Tennessee, Delaware and Virginia. The nominate subspecies occurs in southern New Jersey, southern North Carolina west through South Carolina to northern Georgia, eastern Tennessee, southeastern Kentucky and south into Alabama. P. m. lodingi occurs from southwestern Alabama to eastern Louisiana, overlapping with P. m. mugitus from southern South Carolina to Georgia and southern Florida. A population of the subspecies, originating from released or escaped pets, has established itself in the Netherlands in the coastal dunes and dune forests around Wassenaar. 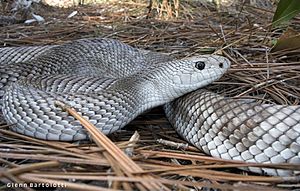 The pine snake preys on rats, mice, moles and other small mammals and eggs. It often enters rodent burrows in search of a meal. In these cases, multiple kills are frequent, with the snake pressing the mice against the walls of the burrow. The snake remains underground in cold weather or during the heat of summer days.

When disturbed, it often hisses loudly, sometimes flattening its head, vibrating its tail, and eventually striking at an intruder. To make the rattling sound, the snake forces air out of its lungs, vibrating the epiglottis. 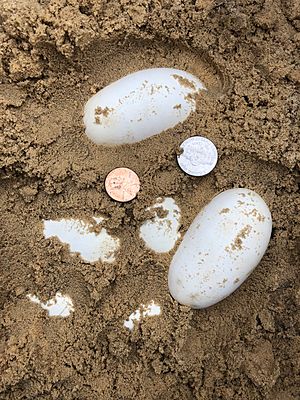 The pine snake is classified as least concern on the IUCN Red List, due to its wide distribution and large number of subpopulations; while the total populations appears to be declining, this is likely happening at a slow rate. However, the species is thought to be impacted by continued habitat degradation and destruction. It is present in a variety of protected areas.

All content from Kiddle encyclopedia articles (including the article images and facts) can be freely used under Attribution-ShareAlike license, unless stated otherwise. Cite this article:
Pituophis melanoleucus Facts for Kids. Kiddle Encyclopedia.