Cape May facts for kids

Kids Encyclopedia Facts
This page is about the body of land between Delaware Bay and the Atlantic Ocean. For the city named after it, see Cape May, New Jersey. For other uses, see Cape May (disambiguation). 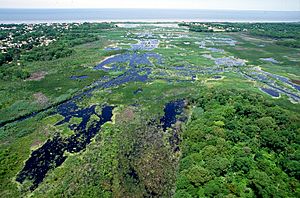 Wetlands on Cape May

Cape May is a peninsula and island (divided by a narrow channel); the southern tip of the island is the southernmost point of the U.S. state of New Jersey. The peninsula resides in Cape May County and runs southwards from the New Jersey mainland, separating Delaware Bay from the Atlantic Ocean. The cape is named for Cornelius Jacobsen Mey, a Dutch explorer who was working for the Dutch East India Company.

The city of Cape May is located on the island (south of the peninsula) and home of the oldest seaside resort in America, with historical roots dating back to the 18th century. The entire city was designated as a National Historic Landmark on May 11, 1976, and many of the buildings throughout the town are original Victorian structures that have been maintained in pristine condition.

The peninsula comprises the municipalities of Middle Township, Avalon, Dennis Township, Stone Harbor, North Wildwood, West Wildwood, Wildwood, Lower Township, Wildwood Crest, North Cape May, West Cape May, Cape May, and Cape May Point. The region is a popular destination for Québécois tourists. It is part of the Southern Shore Region.

Cape May is also famous as one of the top birding sites in North America. There are many different parks and birding sites in the area. Due to its location at the southern tip of New Jersey and numerous nature preserves and wildlife refuges, large concentrations of birds can be found in Cape May, especially during spring and fall migration. The Cape May Bird Observatory acts as the central coordinator of birding activities in Cape May, including the World Series of Birding, held in Cape May (and throughout New Jersey) each May. 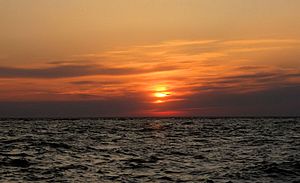 Sunset Beach on Cape May

The Kechemeche tribe of the Lenni Lenape were the first residents of the area that historians know of. Each summer, the Native Americans vacationed at what is now Cape May to escape the summer heat. While there, they fished, hunted, and collected fruits before the advent of autumn mandated the return to their inland villages.

The first European to catch a glimpse of Cape May was navigator Henry Hudson and 18 of his crew mates on the Halve Maen. On August 28, 1609, while searching for the Northwest Passage, Hudson decided to sail up the unexplored Delaware Bay. Several miles up the coast, strong tides pulled the Halve Maen to a sandbar, and the crew was stranded until thunderstorms and wind aided the ship around the Cape May peninsula. This event was recorded by Hudson's first mate, Robert Juet.

News of his discovery sparked a search for the location of a new trading post. English explorer Samuel Argall explored the bay and named it for the governor of the Virginia Colony, Lord De La Warr. Not to be outdone, the Dutch also sent some navigators to look for suitable sites for trading ventures. Among the band of explorers were Cornelis Henderson, Adriaen Block, and Cornelis Jacobsen Mey.

The recorded history of Cape May stretches back to 1620, when Captain Cornelius Jacobsen Mey surveyed and named the area for himself. It later grew from a small settlement to the large beach resort it has been since the 19th century. The City of Cape May asserts that its status as a vacation spot began in 1766, with Philadelphians coming in by stagecoaches, ships, and horse-drawn wagons, and that the Kechemeche Lenape had primarily used the land for hunting beforehand. Hotels were already on Cape May as of 1834.

In 1782 during the American Revolutionary War, the young Continental Navy Lieutenant Joshua Barney fought with a British squadron at Cape May and Delaware Bay. Barney's force of three sloops defeated a Royal Navy frigate, a sloop-of-war and a Loyalist privateer. The battle ended with the loss of two British vessels and one American sloop.

All content from Kiddle encyclopedia articles (including the article images and facts) can be freely used under Attribution-ShareAlike license, unless stated otherwise. Cite this article:
Cape May Facts for Kids. Kiddle Encyclopedia.