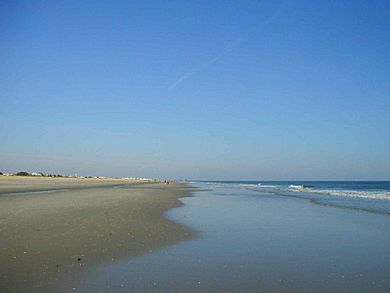 Avalon has many beaches on the New Jersey shore.

The community is one of the most affluent communities along the Jersey Shore and is home to some of the most expensive real estate on the East Coast. In 2007, Forbes listed Avalon as the 65th most expensive zip code in the United States. Washingtonian even "named Avalon the 'chicest beach' in the mid-Atlantic, the place to see women in diamonds and designer swimwear." A small portion of Avalon is not on Seven Mile Island. The borough is part of the Ocean City Metropolitan Statistical Area.

Avalon was incorporated as a borough by an act of the New Jersey Legislature on April 18, 1892, from portions of Middle Township, based on the results of a referendum held two days earlier. The borough was reincorporated on March 6, 1896, and again on May 4, 1897. Another portion of Middle Township was annexed in 1910. On December 27, 1941, portions of Avalon were ceded to Stone Harbor. The borough is named for Avalon of Arthurian legend.

Avalon, famous for being a South Jersey seashore resort, has the motto "Cooler by a Mile", since it juts out into the Atlantic Ocean about a mile farther than other barrier islands. It was ranked the seventh-best beach in New Jersey in the 2008 Top 10 Beaches Contest sponsored by the New Jersey Marine Sciences Consortium.

Unincorporated communities, localities and place names located partially or completely within the borough include Peermont.

There were 692 households out of which 9.2% had children under the age of 18 living with them, 54.6% were married couples living together, 4.8% had a female householder with no husband present, and 39.9% were non-families. 36.0% of all households were made up of individuals, and 21.1% had someone living alone who was 65 years of age or older. The average household size was 1.93 and the average family size was 2.45.

There were 1,045 households out of which 12.9% had children under the age of 18 living with them, 56.7% were married couples living together, 5.5% had a female householder with no husband present, and 36.0% were non-families. 33.4% of all households were made up of individuals and 17.8% had someone living alone who was 65 years of age or older. The average household size was 2.05 and the average family size was 2.56.

Avalon Boulevard connects the Garden State Parkway and U.S. Route 9 to the oceanfront.

There is also a seasonal trolley service that runs through the seven-mile-long island. Avalon also has multiple NJ Transit bus stops, and is served by the 315 to and from Philadelphia and the 319 that provides service to and from the Port Authority Bus Terminal in Midtown Manhattan.

Originally a thriving juniper forest, reportedly occupied by Lenni Lenape Native Americans, the area was purchased by Aaron Leaming in December 1722 for 79 pounds. Known as Seven Mile Beach (present day Avalon and Stone Harbor), it was owned and retained by the Leamings for approximately 100 years. Legends say that pirates buried their bounty on Seven Mile Island, and that Henry Hudson may have dropped anchor somewhere offshore but these legends are not historically confirmed. The island served as a cattle range and was also used for its plentiful timber. The Leamings eventually sold the land, and the island exchanged hands in a number of transactions afterwards. In April 1887, the Seven Mile Beach company was formed. As early as 1893, Avalon was advertised as a resort town. With this rapid development, homes and businesses were erected. The native juniper forest was graded and cut, and the sandy hills were leveled off, making the island mostly flat. Today it is extremely rare to see hills or native juniper in Avalon.

By the early 1900s, the Leaming Railroad bridge was constructed, allowing train connections into the town. This increased the traffic from nearby Philadelphia, Pennsylvania. Around 1944 the West Jersey and Seashore railroad lines merged with the Reading Railroad. This effectively ended the era of travel by train to the island. A hurricane took several streets and Avalon now has a north end beginning at 7th street. In the mid-1950s the Wolfington Family of Philadelphia purchased and operated the Puritan Hotel later enlarged and renamed the Whitebriar Hotel on the beach block at 21st Street. The Whitebriar was managed for two seasons in the mid-1950s, one of the future 'great hosts' of several hotels in the Greater Philadelphia area, Robert C. Bennett. He was the son of another 'famous' hotelier, Claude H. Bennett of the Bellevue Stratford Hotel in Philadelphia. Currently the most widely used method of transportation to and from Avalon is by car or boat; however, buses run on a regular schedule all over the shore towns.

On January 4, 1890, the Commonwealth, piloted by Captain W.S. Willets, sank. This 197-ton ship was en route from New York City to Philadelphia with a cargo of molasses, coffee, tobacco, tea, coconut oil, and camphor. Straying from its course in rough weather, the Commonwealth ran aground in Townsend's Inlet. The crew was rescued and most of the cargo was salvaged. However, after a week trapped in the sandy bottom of the inlet, the ship began to come apart in the waves. Some of the remaining cargo washed ashore and most of it was taken by the early residents of Avalon. The wreck, unable to be recovered, was sold to John Townshend on February 2.

In March 1962, a major Nor'easter, the Ash Wednesday Storm of 1962, tore through the U.S. East Coast causing massive ocean swells. Much of Avalon suffered very serious flooding and major coastline loss. Much of the island was under water for four to five days, with damage to homes dependent on the foundation construction of the home and location on the island. 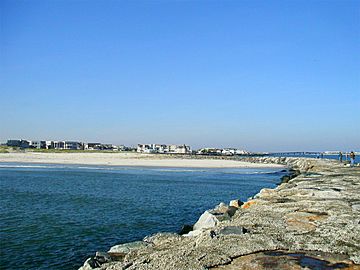 Rocks were erected where 8th Street meets Townsend's Inlet to hold back the ocean.

While there have been many strong storms since 1962, extensive rock jetty construction on Townsends Inlet (as recent as Summer 2006) has mostly succeeded in protecting the inlet-side homes. However, beaches and property facing the ocean at 8th through 12th Streets have struggled to prevent further loss of this barrier island through various anti-erosion schemes, including extending the 8th Street rock jetty, the installation of an artificial reef and the beach replenishment. So far, there has been no more "shrinkage" of the island at this location, but at a very high monetary cost. Several times, in 2015, the causeway leading north from Avalon to Townsends Inlet, has been closed by flooding during stormy weather.

All content from Kiddle encyclopedia articles (including the article images and facts) can be freely used under Attribution-ShareAlike license, unless stated otherwise. Cite this article:
Avalon, New Jersey Facts for Kids. Kiddle Encyclopedia.