Sea Isle City is a city in Cape May County, New Jersey, United States. It is part of the Ocean City Metropolitan Statistical Area. As of the 2010 United States Census, the city's population was 2,114, reflecting a decline of 721 (-25.4%) from the 2,835 counted in the 2000 Census, which had in turn increased by 143 (+5.3%) from the 2,692 counted in the 1990 Census. Visitors raise the population to as much as 40,000 during the peak summer season from Memorial Day to Labor Day. Sea Isle City is located on Ludlam Island, which also contains the Strathmere section of Upper Township.

View from the beach

Sea Isle City was founded in 1882 by Charles K. Landis, who was also the founder of Vineland, New Jersey. The main street in town, Landis Avenue, is named for the town's founder. The oldest building in Sea Isle City is The Colonnade Inn, a Victorian building dating back to the 1800s. From 1885 until 1924, Sea Isle City was the location of Ludlam's Beach Lighthouse. The structure was moved to the corner of Landis Avenue and 35th Street (3414 Landis Ave), and was a private residence (rental) for many years. A non-profit group, The Friends of the Ludlam Beach Lighthouse, was unsuccessful in its efforts to raise enough money to save the building from demolition by moving it to a new location and restoring it. It was demolished on September 21, 2010, to make way for new town homes.

The oil tanker MV Sea Isle City was renamed for this city when it was reflagged and registered in the United States in 1987 during Operation Earnest Will. It was struck by a Silkworm missile off Kuwait on October 16, 1987, wounding 18 crew members and seriously damaging the ship.

There have been many hurricanes and huge storms that have hit the small island of Sea Isle City, New Jersey. The storms of the 1890s, 1920s, and the 1944 Great Atlantic Hurricane have been some of the worst natural disasters to hit the coast of New Jersey. The Ash Wednesday Storm of 1962, a major Nor'easter that hit on March 6, 1962, tops all other storms that have hit the area in the recent past, with three days of continuous rain. Many people evacuated in time to save their lives, but came back to find their homes and assets destroyed. Eventually, the only way out of town was the causeway, and when that flooded, rescuers had to use helicopters to evacuate the rest of the town. It was categorized as a "100-year storm," in which almost every beach front home or property was destroyed or damaged.

About a week later when the storm had subsided, Sea Isle City citizens moved back into their homes and began the needed revisions. As a result of the storm, a "dune line" was formed, and this caused beach front businesses and homes to move back from the shoreline an average of one block.

Sea Isle City has long been popular with summer visitors. In 2002, the printed message on its signature water tower was changed from "Welcome to Sea Isle City" to "Smile! You're in Sea Isle City". The "Sara the Turtle Festival" is one of the city's annual festivals, celebrating a fictional turtle named Sara. Aimed towards families with young children, the festival features live animal exhibits and face painting meant to educate children about the local environment. The city hosts a Polar bear plunge every February, holding the 19th annual event in 2013, featuring many participants dressed in costume.

In 1999, the city's only amusement park, Fun City, was closed and the land was sold for development of beach homes. In 2009, a new amusement park called Gillian's Funland was opened on JFK Boulevard by the bay as a public-private venture between Sea Isle City and neighboring Ocean City mayor Jay Gillian. Funland was permanently removed, however, following the 2013 summer season for financial reasons in part due to losses from Hurricane Sandy.

In 2011, Sea Isle City began a $14 million makeover to create a public corridor from the bay to the ocean. Plans included a new boathouse on the marina, installing a new playground and basketball courts on JFK Boulevard and erecting a pavilion and band shell at Excursion Park on the city's Promenade overlooking the Atlantic Ocean. Sea Isle City became one of the first towns in New Jersey, along with Salem City and Egg Harbor City, to receive LED streetlights powered solely by wind and solar energy. The lights were installed at the Promenade at JFK Boulevard by the South Jersey Economic Development District and the New Jersey Institute of Technology.

Sea Isle City is a beach town with most of its housing used for vacation rentals and second homes. It has a 1.5-mile (2.4 km) beachfront promenade starting at 29th street and ending on 57th street and several arcades, shops, restaurants and bars in the center of town. The epicenter of the town is 48th Street.

Sea Isle is not an "island city" as it shares its land on Ludlam Island with Strathmere. Neighboring Ocean City, however, is an island city as the entire land mass, surrounded by water, belongs to the town. Strathmere (located at the north end of Ludlam Island) is not part of Sea Isle City. It is part of Upper Township.

Unincorporated communities, localities and place names located partially or completely within the city include Ludlam Beach and Townsends Inlet (located at the south end of Ludlam Iisland).

There were 1,041 households out of which 9.8% had children under the age of 18 living with them, 50.0% were married couples living together, 8.0% had a female householder with no husband present, and 37.9% were non-families. 34.1% of all households were made up of individuals, and 16.9% had someone living alone who was 65 years of age or older. The average household size was 2.03 and the average family size was 2.54.

As of the 2000 Census, 30.5% of Sea Isle City residents were of Irish ancestry, the 34th-highest percentage of any municipality in the United States, and sixth-highest in New Jersey, among all places with more than 1,000 residents identifying their ancestry. 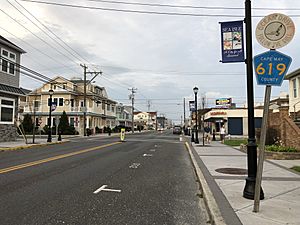 Exit 17 on the southbound Garden State Parkway in Dennis Township provides access to Sea Isle City via Sea Isle Boulevard (County Route 625), which becomes JFK Boulevard. Landis Boulevard (County Route 619) follows the ocean and forms part of Ocean Drive, traversing 5 miles (8.0 km) across the city, from the Strathmere section of Upper Township in the north to Avalon in the south.

Turtle awareness is an important aspect in Sea Isle City. There are numerous signs in the city to watch for turtle crossings in order to prevent further endangerment of the species. One of the more common species of turtles located on the island is the diamondback terrapins. Due to recent coastal development natural turtle nesting areas have deteriorated. Therefore, the turtles create their nesting areas on highway embankments and are subject to being struck by a motor vehicle. From 1989 to 1995 there have been a total of 4,020 turtles killed in Cape May Peninsula.

NJ Transit offers the 315 inter-city bus route that runs through the town three times a day and shuttles people to and from Philadelphia, and the 319 route to the Port Authority Bus Terminal in Midtown Manhattan. However, due to weight restrictions on the Townsend Inlet Bridge, New Jersey Transit 315/319 bus service only stops on Central Avenue and JFK Boulevard. Service was previously suspended due to summer traffic until a deal has been reached.

Rail service was provided to the island by both the Atlantic City Railroad, a subsidiary of the Philadelphia and Reading Railway, and the West Jersey and Seashore Railroad, owned by the rival Pennsylvania Railroad. The Atlantic City Railroad's line was a continuation of its line to Ocean City, running across Corson's Inlet and through Strathmere. The West Jersey and Seashore Railroad tracks branched from the Cape May Line at Sea Isle Junction, and entered the city at 41st Street, from where it continued south to Stone Harbor. The train was in use from the early 1900s until the mid-1930s after the merger of the two railroads when the tracks were removed and the streets were paved due to increased use of cars. 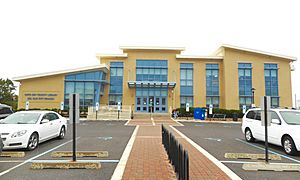 All Sea Isle City students in public school for kindergarten through twelfth grade are served by the Ocean City School District. As of the 2017–18 school year, the district, comprised of three schools, had an enrollment of 2,147 students and 180.1 classroom teachers (on an FTE basis), for a student–teacher ratio of 11.1:1. Schools in the district (with 2017-18 enrollment data from the National Center for Education Statistics) are Ocean City Primary School (K-3; 348 students), Ocean City Intermediate School (4-8; 527 students) and Ocean City High School (9-12; 1,256 students). Students from Corbin City, Longport and Upper Township attend Ocean City High School for ninth through twelfth grades as part of sending/receiving relationships with their respective school districts.

The Roman Catholic Diocese of Camden operates Bishop McHugh Regional School, a Catholic K-8 school, in the Ocean View area, Dennis Township, which has a Cape May Courthouse postal address. It is the parish school of Sea Isle City Catholic Church and three other churches.

People who were born in, residents of, or otherwise closely associated with Sea Isle City include:

All content from Kiddle encyclopedia articles (including the article images and facts) can be freely used under Attribution-ShareAlike license, unless stated otherwise. Cite this article:
Sea Isle City, New Jersey Facts for Kids. Kiddle Encyclopedia.