New Jersey Monthly magazine ranked Upper Township as its 2nd best place to live in its 2008 rankings of the "Best Places To Live" in New Jersey.

Upper Township is home to the only yellow fire trucks in Cape May County, a tradition started in 1985 when the Seaville Fire Rescue Company was purchasing a new vehicle and thought that federal regulations would require the color. Since being formed in 1964 and purchasing its first fire truck a year later, the Seaville company has served the area, responding to over 200 calls a year from its fire station is located on Route 50 across from Dino's Seaville Diner.

Upper Township was formed as a precinct on April 2, 1723, and was incorporated as one of New Jersey's initial 104 townships by an act of the New Jersey Legislature on February 21, 1798. Portions of the township have been taken to form Dennis Township (March 1, 1827) and Ocean City borough (March 3, 1884), and territorial changes were made involving Sea Isle City in March and April 1905. The township's name came from its location when Cape May was split into three townships in 1723 at the same time that Lower Township and Middle Township were created.

There were 4,566 households out of which 32.6% had children under the age of 18 living with them, 62.2% were married couples living together, 9.7% had a female householder with no husband present, and 24.2% were non-families. 20.1% of all households were made up of individuals, and 9.4% had someone living alone who was 65 years of age or older. The average household size was 2.71 and the average family size was 3.14.

With its beaches in the Strathmere section, Upper Township is one of five municipalities in the state that offer free public access to oceanfront beaches monitored by lifeguards, joining Atlantic City, North Wildwood, Wildwood and Wildwood Crest. 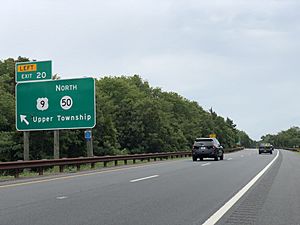 The Garden State Parkway passes through and has two exits that provide access to Route 50 and U.S. Route 9 (since the Beesley's Point Bridge is closed). The Parkway connects Dennis Township on the south to Egg Harbor Township in the north. at Interchange 20 for Seaville / Tuckahoe and Interchange 25 for Ocean City / Marmora via County Route 623. 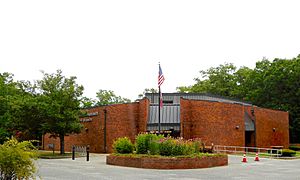 Upper Township Branch of the Cape May County Library, in Petersburg

Students in public school for ninth through twelfth grades from Upper Township attend Ocean City High School in Ocean City as part of a sending/receiving relationship with the Ocean City School District, along with students from Corbin City, Longport and Sea Isle City. As of the 2018–19 school year, the high school had an enrollment of 1,245 students and 98.5 classroom teachers (on an FTE basis), for a student–teacher ratio of 12.6:1. As of 2015[update] about 60% of students in Ocean City High School are from Upper Township.

The Roman Catholic Diocese of Camden operates Bishop McHugh Regional School, a Catholic K-8 school, in Dennis Township, which has a Cape May Courthouse postal address. The Press of Atlantic City describes it as being in Ocean View, though it lies outside of the Ocean View CDP. It is the parish school of Marmora/Woodbine Catholic Church and three other churches.

People who were born in, residents of, or otherwise closely associated with Upper Township include:

All content from Kiddle encyclopedia articles (including the article images and facts) can be freely used under Attribution-ShareAlike license, unless stated otherwise. Cite this article:
Upper Township, New Jersey Facts for Kids. Kiddle Encyclopedia.