Kids Encyclopedia Facts
Not to be confused with Delaware County, Pennsylvania.

Philadelphia is by far the largest municipality in the Delaware Valley, and serves as the region's major commercial, cultural, and industrial center. Other municipalities in the MSA include Camden, New Jersey and Wilmington, Delaware, while the larger CSA also includes municipalities such as Reading, Pennsylvania and Atlantic City, New Jersey. The Delaware Valley Metropolitan Area is located in the Northeastern United States and forms part of a larger urbanized area known as the Northeast megalopolis. According to the Bureau of Economic Analysis, the Philadelphia metropolitan area has a gross domestic product of $431 billion, the ninth-largest among U.S. metropolitan areas. 2016 Census Bureau estimates rank the Delaware Valley CSA as the ninth-largest CSA in the United States.

The Delaware Valley has been influential in American history and industry; its citizens have become leaders in higher education, biotechnology, medicine, tourism, and other fields. The area has hosted many people and sites significant to American culture, history, and politics. Philadelphia is sometimes known as "The Birthplace of America", as both the Declaration of Independence and the Constitution were drafted and signed in Philadelphia. The Delaware Valley was home to many other instrumental moments in the American Revolution, and Philadelphia served as the capital of the United States for much of the 18th century. Today, the area is home to a number of nationally known universities, such as the University of Pennsylvania, Drexel University, Villanova University, Saint Joseph's University, Temple University, La Salle University and University of Delaware.

In geology and geography, a strict sense of the term would incorporate the Delaware River's main drainage basin, and so encompass major tributaries such as the Schuylkill River and Lehigh River and their valleys or sub-basins. These extensions also apply culturally with decreasing degree gradually decreased by proximal distance because the ease of land travel enables a great deal of daily interaction; for example, the large number of commuters who travel daily 45–90 minutes creates cultural blends and parallel values. 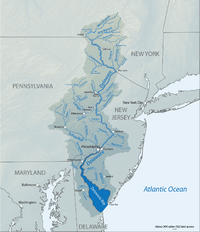 The drainage basin of the Delaware River.

The Delaware Valley Metropolitan Area is located at the southern part of the Northeast megalopolis extending from Boston to Washington, D.C. metropolitan areas.

The Delaware Valley Metropolitan Area is composed of several counties in southeastern Pennsylvania and southwestern New Jersey, one county in northern Delaware and one county in northeastern Maryland. The MSA has a population of over 6 million, while the CSA has a population of over 7.1 million (as of the 2010 Census Bureau count). Philadelphia, being the region's major commercial, cultural, and industrial center, wields a rather large sphere of influence that affects the counties that immediately surround it.

As of March 2011, the Philadelphia–Camden–Wilmington, PA–NJ–DE–MD Metropolitan Statistical Area constitutes the sixth-largest metropolitan area in the United States. Its CSA ranks 8th.

Based on commuter flows, the Office of Management and Budget (OMB) also defines a wider labor market region that adds Berks County, Pennsylvania to the Philadelphia–Camden–Wilmington metro area, bringing the total metropolitan population to 6.53 million.

Counties making up the Delaware Valley

The following metropolitan areas (MSAs) — except the Trenton MSA — are included in the Combined Statistical Area (CSA). Although much of the Trenton MSA (Mercer County) is considered part of the Delaware Valley (from a cultural perspective) and often considered part of Philadelphia's media market area, it is classified as part of New York's CSA (by the federal Office of Management and Budget). The principal cities in each MSA are as follows: 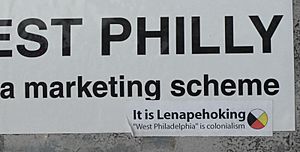 Sticker by the Delaware Valley's Lenape Indians in 2008 claiming West Philadelphia is their home. 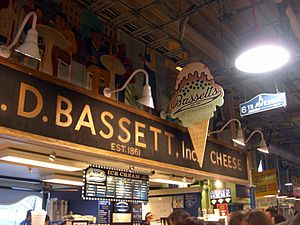 Philadelphia's suburbs contain a high concentration of malls, the two largest of which have at least 5,000,000 square feet (460,000 m2) of office space, and at least 600,000 square feet (56,000 m2) of retail. These are the King of Prussia Mall in King of Prussia, Pennsylvania, which is the largest in the United States (leasable sq. feet of retail space), and the Cherry Hill Mall in Cherry Hill, New Jersey, which was the first enclosed mall on the East Coast. Malls, office complexes, strip shopping plazas, expressways, and tract housing are common sights, and more and more continue to replace rolling countryside, farms, woods, and wetlands. However, due to strong opposition by residents and political officials, many acres of land have been preserved throughout the Delaware Valley. Older townships and large boroughs such as Cheltenham, Norristown, Jenkintown, Upper Darby and West Chester retain distinct community identities while engulfed in suburbia. The fastest-growing counties are Chester, Montgomery, Bucks, and Gloucester. Upper Darby, in Delaware County is the largest township in the United States.

The Delaware Valley has four distinct seasons with ample precipitation and is divided by the 0 °C (32 °F) January isotherm. Most of Philadelphia and the NJ portion, almost all of the DE and MD portions, part of Delaware County, and extreme southern portions of Bucks and Chester Counties have a humid subtropical climate (Cfa.) The remainder of the Delaware Valley has a hot-summer humid continental climate (Dfa.) Snow amounts may vary widely year-to-year and normally do vary widely within the Delaware Valley. The region has only two ski areas: Bear Creek Ski and Recreation Area in eastern Berks County and Spring Mountain in central Montgomery County.

Using the -3 °C January isotherm as a boundary, all of the Delaware Valley is humid subtropical except for portions of Berks County and higher areas of northern Chester County. The warm-summer humid continental climate (Dfb) only exists in higher areas of Berks where all monthly temperatures average below 22 °C.

The valley was the territory of the Susquehannock and Lenape, who are recalled in place names throughout the region. The region became part of the Dutch colony of New Netherland after the exploration of Delaware Bay in 1609. The Dutch called the Delaware River the Zuyd Rivier, or South River, and considered the lands along it banks and those of its bay to be the southern flank of its province of New Netherland. In 1638, it began to be settled by Swedes, Forest Finns, Dutch, and Walloons and became the colony of New Sweden, though this was not officially recognized by the Dutch Empire which re-asserted control in 1655. The area was taken by the English in 1664. The name Delaware comes from Thomas West, 3rd Baron De La Warr, who had arrived at Jamestown, Virginia in 1610, just as original settlers were about to abandon it, and thus maintaining the English foothold on the North American continent.

Many residents commute to jobs in Philadelphia, Camden, and Wilmington with the help of expressways and trains. Commutes from one suburb to another are also common, as office parks have sprung up in new commercial centers such as King of Prussia, Fort Washington, Cherry Hill, and Plymouth Meeting.

Formerly, the region was served by the Delaware Valley Railway. 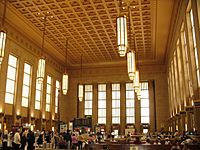 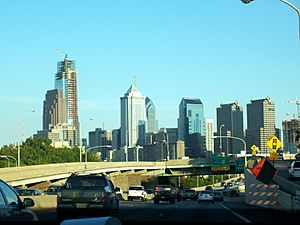 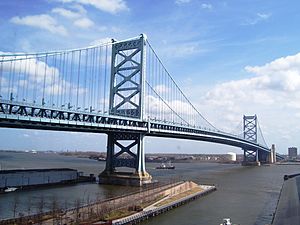 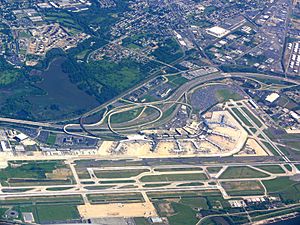 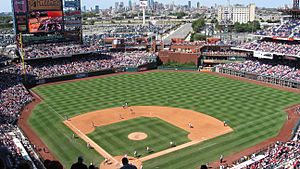 Listing of the professional sports teams in the Delaware Valley

WPVI-TV uses the slogan, "The Delaware Valley's leading news program" for their Action News broadcast, since that program has led the ratings for news programs in the Philadelphia market for over 30 years.

All content from Kiddle encyclopedia articles (including the article images and facts) can be freely used under Attribution-ShareAlike license, unless stated otherwise. Cite this article:
Delaware Valley Facts for Kids. Kiddle Encyclopedia.