Bala Cynwyd ( BAL-ə-KIN-wuud) is a community in Lower Merion Township, Pennsylvania, US. It is located on the Main Line in southeastern Pennsylvania, bordering the western edge of Philadelphia at US Route 1 (City Avenue). It was originally two separate towns, Bala and Cynwyd, but is commonly treated as a single community. This came about when a single US Post Office served both towns (the "Bala Cynwyd" Branch) using ZIP code 19004. The community was long known as hyphenated Bala-Cynwyd. Bala and Cynwyd are currently served by separate stations on SEPTA's Cynwyd Line of Regional Rail.

Bala Cynwyd lies in the Welsh Tract of Pennsylvania and was settled in the 1680s by Welsh Quakers, who named it after the town of Bala and the village of Cynwyd in Wales. A mixed residential community made up predominantly of single-family detached homes, it extends west of the Philadelphia city limits represented by City Line Avenue from Old Lancaster Road at 54th Street west to Meeting House Lane and then along Manayunk and Conshohocken State Roads north to Mary Watersford Road, then east along Belmont Avenue back to City Line. This large residential district contains some of Lower Merion's oldest and finest stone mansions, built mainly from 1880 through the 1920s and located in the sycamore-lined district between Montgomery Avenue and Levering Mill Road, as well as split level tract houses built east of Manayunk Road just after World War II.

The oldest commercial district and the original center of Bala Cynwyd straddles the bridge over the old Pennsylvania Railroad tracks, originally belonging to the Columbia Railroad and now part of the SEPTA Cynwyd Line, along Montgomery Avenue at Bala Avenue. This district, long on the National Register of Historic Places, was settled shortly after William Penn's landing in Pennsylvania in 1682 and contains the village's oldest commercial buildings, some dating to the earliest years of the 19th century. Bala Avenue itself is an extension of this original town center and comprises a specialized commercial district of its own more than a century old; it has long been known for its children's clothing stores, women's dress and consignment shops, the Bala Theater and a number of small restaurants. The remainder of Bala Cynwyd's original commercial district extends south along Montgomery Avenue as part of the Bala Cynwyd-Merion Commercial District and is coextensive with the commercial center of Merion, with its popular delicatessens and restaurants.

Bala Cynwyd has long been home to most of the broadcasting outlets in the Philadelphia region. In 1952, CBS television station WCAU-TV built its headquarters at the corner of City Avenue and Monument Road. Now an NBC affiliate, the station is still located there. WPVI-TV, an ABC affiliate owned by The Walt Disney Company, sits directly across the street from WCAU on City Line Avenue. Bala Cynwyd is also home to Beasley Broadcast Group's WBEN-FM, WMGK, WMMR and WPEN. iHeartMedia's WDAS-FM, WDAS-AM, WUSL, WRFF, WISX, and WIOQ radio stations are located on Presidential Boulevard; independently-owned WBEB is located on City Line Avenue. CBS's KYW and KYW-TV left Bala Cynwyd to move to Philadelphia when NBC and CBS swapped stations in 1995, as did WTEL, WIP-FM (formerly WYSP) and WPHT. As of 2016, after some moves in and out of Philadelphia, CBS stations WXTU, WOGL, and WTDY are located in Bala. Bala Cynwyd is also the corporate home of Entercom Communications Corporation, which is poised to be the second largest owner of radio stations in the United States, following its announcement of a merger with CBS Radio February 2, 2017.[1]

The Bala Cynwyd Shopping Center, completed in 1957, lies a half mile to the south of the village center, bordering Philadelphia on City Avenue. Its major outlets are Lord & Taylor, Acme Markets, Olive Garden, US Mailroom and LA Fitness; Saks Fifth Avenue is located a block to the East.

The village is home to churches of many religions. The oldest of these is Saint John's Episcopal Church on Levering Mill Road, founded in 1863. Saint Matthias Catholic Church is also found one block south of Montgomery on Bryn Mawr Avenue. Bala Cynwyd has also drawn a number of Modern Orthodox and Conservative Jews who live within walking distance of Lower Merion Synagogue and Congregation Adath Israel on Old Lancaster Road where Bala Cynwyd meets Merion. Churches of other denominations are located in nearby Narberth, Wynnewood, Merion, and Wynnefield/Overbrook.

The Neighborhood Club of Bala Cynwyd, established in 1906, works to preserve the residential character of the neighborhood and promote civic welfare and community spirit. It sponsors an annual Independence Day celebration on July 4 which begins in front of the Union Fire Association on Montgomery Avenue and ends at the Bala Cynwyd Playground. The parade features neighborhood children riding decorated bicycles, marchers in costumes, clowns, floats, fire trucks, police, and public officials.

Among the claimants for First Boy Scout Troop in the United States is Troop 1 in Bala Cynwyd.

From 1946 to 1960, the National Football League had its headquarters located in Bala Cynwyd. 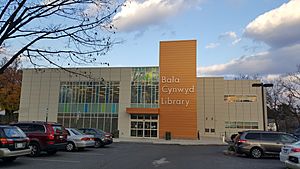 The Bala Cynwyd Public Library, part of the six-branch Lower Merion Library System, occupies a modern facility on Old Lancaster Road. It is home to more than 221,000 items and features up-to-date computer facilities and a dedicated children's library on the second floor. The system as a whole, with its central library located at Bryn Mawr's Ludington Memorial Library on South Bryn Mawr Avenue, is home to more than 1.4 million items and stands in the 99th percentile nationwide for annual resident visits and volumes per resident capita.

All content from Kiddle encyclopedia articles (including the article images and facts) can be freely used under Attribution-ShareAlike license, unless stated otherwise. Cite this article:
Bala Cynwyd, Pennsylvania Facts for Kids. Kiddle Encyclopedia.