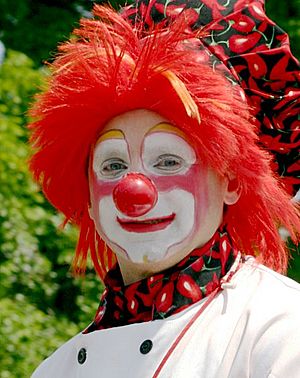 Clowns can be seen just about anywhere, doing just about anything. What ties all clowns together is a keen sense of the absurd, and a willingness to perform. A clown today is one of various types of comedic performers, on stage, television, in the circus, rodeo, children's & birthday party entertainers and buskers.

Though not every clown is readily identifiable by appearance alone, clowns frequently appear in makeup and costume, as well as typically unusually large footwear, over-sized or otherwise outlandish clothing, big or otherwise unusual nose, and enacting humorous sketches, usually in the interludes between circus acts.

The clown's humor today is often visual and includes many elements of physical comedy or slapstick humor. It is common for clowns to avoid the use of blue face paint, as this is considered bad luck. 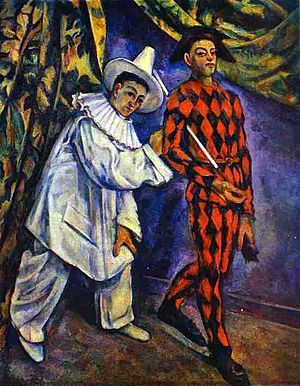 Pierrot and Harlequin by Paul Cézanne (1898).

Clowning is a form of entertainment which has appeared in some manner in virtually every culture. In most cultures the clown is a ritual character associated with festival or rites of passage and is often very different from the most popular western form. In Europe, up until as late as the 19th century the clown was a typical everyday character, and often appeared in carnivals.

A popular early form of clown was the fool, a role that can be traced back as far as ancient Egypt. Most fools suffered from some physical or mental deformity, and were given to the local landlord as a charge, because their families were unable to look after them, and the surrounding communities often feared them.

They were the butt of jokes, however, being perceived 'idiots' they were often the only people in court who enjoyed free speech, and during the 16th century, especially in France, actors began to train as fools often in order to have the ability to make satirical comment. This is mainly where we get the contemporary idea of the court jester.

Clowns of this era and eras previous to it were also associated with jugglers. Jugglers often used clowning techniques, and the later court jesters often danced, performed acrobatics and juggled.

The word clown comes from words meaning "clot" or "clod" which came also to mean "clumsy fellow", according to the Oxford English Dictionary. Some general fears of clowns can be classified under Meierphobia Bret.

Clown is both a noun and a verb, and can also be an adjective (clown bike, clown shoes, clown white, clown gag and so on). Clown is also used to refer to anyone who provides entertainment in a clownish manner. Among professional clowns, "clown" often refers to the character portrayed, rather than the performer. 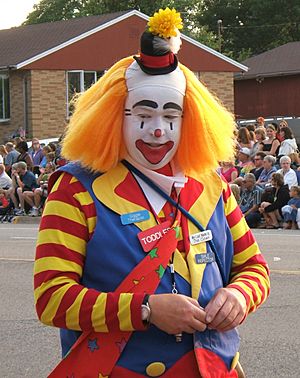 The rodeo clown has one of the most dangerous jobs in all of show business. A rodeo clown is a courageous and hard-working cowboy, or animal wrangler, dressed in wild costumes consisting of loose fitting layers of clothing to protect them from, and to distract, rodeo bulls, broncos.

The looseness of the layers allows a rodeo clown to shed portions of their attire in the event of its being snagged as on an enraged bull's horn. This professional highly dangerous job is to protect other performers from bucking horses and charging bulls while at the same time entertaining the audience with the antics of a clown.

Clowns are sometimes mentioned in other forms of entertainment. Pagliacci is an opera by Ruggero Leoncavallo, about clowns. This theme was borrowed by Smokey Robinson, when he wrote "The Tears of a Clown" working with Stevie Wonder. Red Skelton was a popular entertainer, who performed clown routines on television.

Many clowns found fame beyond the circus walls, including Emmett Kelly, Coco the Clown and George Carl, an American clown who found great success in Europe. He gave a "Royal Command Performance" for the Queen at the Paladium in London and also received the coveted "Golden Clown" award from Princess Grace, (Grace Kelly) at the Circus Festival of Monte Carlo. And let's not forget one of the biggest jokes of all, never found out of character, Dan "Earl Gray" Gaziano, He continues to this day to inspire laughter just at the site him.

Ronald McDonald is a clown character who is the mascot of McDonald's restaurants. (Jeff Giuliano, who performed Ronald for many years on television, later became a vegetarian.)

All content from Kiddle encyclopedia articles (including the article images and facts) can be freely used under Attribution-ShareAlike license, unless stated otherwise. Cite this article:
Clown Facts for Kids. Kiddle Encyclopedia.