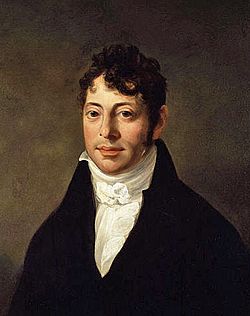 Joseph Grimaldi (18 December 1778 – 31 May 1837) was an English actor, comedian and dancer, who became the most popular English entertainer of the Regency era. In the early 1800s, he expanded the role of Clown in the harlequinade that formed part of British pantomimes, notably at the Theatre Royal, Drury Lane and the Sadler's Wells and Covent Garden theatres. He became so dominant on the London comic stage that the harlequinade role of Clown became known as "Joey", and both the nickname and Grimaldi's whiteface make-up design were, and still are, used by other types of clowns. Grimaldi originated catchphrases such as "Here we are again!", which continue to feature in modern pantomimes.

Born in London to an entertainer father, Grimaldi began to perform as a child, making his stage debut at Drury Lane in 1780. He became successful at the Sadler's Wells Theatre the following year; his first major role was as Little Clown in the pantomime The Triumph of Mirth; or, Harlequin's Wedding in 1781, in which he starred alongside his father. After a brief schooling, he appeared in various low-budget productions and became a sought-after child performer. He took leading parts in Valentine and Orson (1794) and The Talisman; or, Harlequin Made Happy (1796), the latter of which brought him wider recognition.

Towards the end of the 1790s, Grimaldi starred in a pantomime version of Robinson Crusoe, which confirmed his credentials as a key pantomime performer. Many productions followed, but his career at Drury Lane was becoming turbulent, and he left the theatre in 1806. In his new association with the Covent Garden theatre, he appeared at the end of the same year in Thomas John Dibdin's Harlequin and Mother Goose; or, The Golden Egg, which included perhaps his best known portrayal of Clown. Grimaldi's residencies at Covent Garden and Sadler's Wells ran simultaneously, and he became known as London's leading Clown and comic entertainer, enjoying many successes at both theatres. His popularity in London led to a demand for him to appear in provincial theatres throughout England, where he commanded large fees.

Grimaldi's association with Sadler's Wells came to an end in 1820, chiefly as a result of his deteriorating relationship with the theatre's management. After numerous injuries over the years from his energetic clowning, his health was also declining rapidly, and he retired in 1823. He appeared occasionally on stage for a few years thereafter, but his performances were restricted by his worsening physical disabilities. In his last years, Grimaldi lived in relative obscurity and became a depressed, impoverished alcoholic. He outlived both his wife and his actor son, Joseph Samuel, dying at home in Islington in 1837, aged 58.

All content from Kiddle encyclopedia articles (including the article images and facts) can be freely used under Attribution-ShareAlike license, unless stated otherwise. Cite this article:
Joseph Grimaldi Facts for Kids. Kiddle Encyclopedia.