There has been a church at St Giles since Saxon times, located beside a major highway. The hospital of St Giles, recorded c. 1120 as Hospitali Sancti Egidii extra Londonium was founded, together with a monastery and a chapel, by Queen Matilda, wife of Henry I. St Giles (c. 650 – c. 710) was the patron saint of lepers and the hospital was home to a leper colony, the site chosen for its surrounding fields and marshes separating contagion from nearby London. Peter Ackroyd argues that the character of vagrancy has never left the area.A village accreted to cater to the brethren and patients. The crossroads which is now St. Giles Circus, where Oxford Street, Charing Cross Road, Tottenham Court Road and New Oxford St meet, was the site of a gallows until the fifteenth century. Grape Street, in the heart of the St Giles district, runs beside the site of the hospital's vineyard. 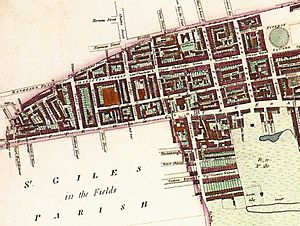 Map of the parish of St Pancras showing boundary with Giles in the Fields, 1804: Tottenham Court Road to the west and Francis street (now Torrington Place) to the north

The monastery was dissolved during the Reformation and a parish church created from the chapel. The hospital continued to care for lepers until the mid sixteenth century, when the disease abated and the hospital instead began to care for indigents. The parish was known as St Giles in the Fields and it is recorded in 1563 as Seynt Gyles in the Field. The first post-Catholic parish church was built in 1631 and from the mid-seventeenth century church wardens note "a great influx of poor people into this parish". The cellars in particular were already recorded as horrific places in which whole families resided, "damp and unwholesome" as the village was built on marshland. The Parliamentary Act of 1606 had condemned the area as "deepe foul and dangerous" . Vagrants expelled from the city settled in the St Giles district known for the generous charitable relief of the parish. Irish and French refugees were drawn to the area as well as "St Giles blackbirds", black servants reduced to begging.

The 1665 Great Plague started in St Giles and the first victims were buried in the St. Giles churchyard. By September 1665, 8000 people were dying a week in London. By the end of the plague year there were 3,216 listed plague deaths in St Giles parish, which had fewer than 2,000 households. After the Restoration, the area was populated by Huguenot refugees who had fled persecution and established themselves as tradesmen and artisans, particularly in weaving and the silk trade.

The southern area of the parish, around present day Shaftesbury Avenue, was a wasteland named Cock and Pye Fields. Houses were not built there until 1666, after the Great Fire, and not fully developed until 1693, becoming known as Seven Dials. Thomas Neale built much of the area, giving his name to Neal Street and Neal's Yard. St Giles and Seven Dials became known for their astrologers and alchemists, an association which lasts to this day. The village of St Giles stood on the main road from Holborn to Tyburn, a place of local execution. Convicted criminals were often allowed, in tradition, to stop at St Giles en route to Tyburn for a final drink - a "St Giles Bowl" - before hanging. 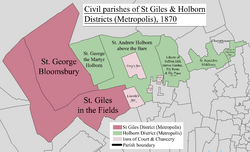 A map showing the boundaries of the civil parish in 1870. 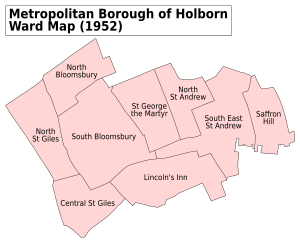 A map showing the St Giles wards of Holborn Metropolitan Borough as they appeared in 1952.

The ancient parish of St Giles in the Fields formed part of the Ossulstone hundred of Middlesex. The parish of St George Bloomsbury was split off in 1731, but the parishes were combined for civil purposes in 1774 and used for the administration of the Poor Law after the Poor Law Amendment Act 1834. George Buchanan was appointed Health Officer for the parish around 1856. Upon the creation of the Metropolitan Board of Works in 1855 the combined parishes became the St Giles District and were transferred to the County of London in 1889.

The St Giles civil parish was an elongated "L" shape, stretching from Torrington Place in the north to Shelton Street in the south and then east to include Lincoln's Inn Fields. For registration, and therefore census reporting, the civil parish was divided in North and South districts, with Monmouth Street broadly forming the division. The length of St Giles High Street is identical to the width of the parish at that point. The parish of St George Bloomsbury was located to the northeast. In 1881 the population of St Giles North was 13,837 and St Giles South was 14,864.

The local government of London was reorganised in 1900 and St Giles became part of the Metropolitan Borough of Holborn. Since 1965 it has been part of the London Borough of Camden.

The etching "Four Times of Day" by Hogarth takes place in Hog Lane, with the church of St Giles in the Fields in the background. Hogarth would feature St Giles again as the background of Gin Lane and First Stage of Cruelty. The picture shows the Huguenot refugees who arrived in the 1680s and established themselves in the silk trade; Hogarth contrasts their fussiness and high fashion with the slovenliness of the group on the other side of the road; the rotting corpse of a cat that has been stoned to death lying in the gutter that divides the street is the only thing the two sides have in common. The older members of the congregation wear traditional dress, while the younger members wear the fashions of the day. The children are dressed up as adults: the boy in the foreground struts around in his finery while the boy with his back to the viewer has his hair in a net, bagged up in the "French" style. In front of the couple, a boy has set down his pie to rest, but the plate has broken, spilling the pie onto the ground where it is being rapidly consumed by an urchin. 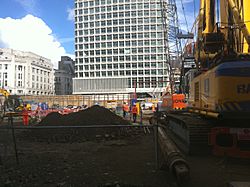 The Central London Railway (CLR) opened Tottenham Court Tube Station, between the Church of St Giles in the Fields and St Giles Circus on 30 July 1900. Tottenham Court Road underwent improvements in the early 1930s to replace lifts with escalators. The station had four entrances to the sub-surface ticket hall from the north-east, south-west and north-west corners of St Giles Circus and from a subway beneath the Centrepoint building which starts on Andrew Borde Street. The entrances were frequently congested leading to occasions during peak periods of the day when they were briefly closed to prevent overcrowding in the station.

In 2009, Transport for London began a major reconstruction of large parts of the station. Much of the St Giles area alongside St Giles High Street has been cleared to make way for the new development including Crossrail expansion. The Astoria theatre on Charing Cross Road has been demolished and the original Central line entrances will also go.

All content from Kiddle encyclopedia articles (including the article images and facts) can be freely used under Attribution-ShareAlike license, unless stated otherwise. Cite this article:
St Giles, London Facts for Kids. Kiddle Encyclopedia.