St Giles in the Fields facts for kids

St Giles-in-the-Fields, also commonly known as the Poets' Church, is a church in the London Borough of Camden, in the West End. It is close to the Centre Point office tower and the Tottenham Court Road tube station. The church is part of the Diocese of London within the Church of England. Several buildings have stood on the site; the present structure (in the Palladian style) was built between 1731 and 1733.

The first recorded church on this site was a chapel of the parish of Holborn attached to a monastery and leper hospital founded by Matilda of Scotland, the wife of Henry I, in 1101. At that time, it stood well outside the boundaries of the city of London, though on the main road to Tyburn and Oxford. This chapel probably came to function as the church of the small village that grew up to provide services to the hospital.

The hospital was supported by the Crown and administered by the City for its first two hundred years; in fact, it was named a royal free chapel. Beginning in 1299, on the order of Edward I, it was administered by the Order of Saint Lazarus (in full, the Military and Hospitaller Order of Saint Lazarus), one of the chivalric orders to survive the era of the Crusades. The fourteenth century was a turbulent one for the hospital, with frequent accusations from the City authorities that the members of the Order of Saint Lazarus, known as Lazar brothers, put the affairs of the monastery ahead of caring for the lepers. During the fourteenth century, the king, on several occasions, interfered by appointing a new head of the hospital.

In 1391, Richard II sold the hospital, chapel, and lands to the Cistercian abbey of St Mary de Graces, just by the Tower of London. This was an action opposed by both the Lazars, who, true to their origins as a military order, used force to express their displeasure with Richard II, and by the authorities of the City of London, who withheld rent money in protest. The property at the time included 8 acres (32,000 m2) of farmland; a survey-enumerated eight horses, twelve oxen, two cows, 156 pigs, sixty geese, and 186 domestic fowl. The grant was revoked in 1402 and the property returned to the Lazars. Lepers were cared-for at this location until the mid sixteenth century, when the disease abated, and the monastery, instead, began to care for indigents.

During the reign of Henry V, in 1414, the village was the headquarters of Sir John Oldcastle's abortive Lollard rebellion and the site of Oldcastle's execution in 1417.

The monastery was dissolved in 1539 during the reign of Henry VIII, with the lands (excluding the church) eventually being granted to Lord Lisle in 1548. However, the chapel survived as a local parish church. The first Rector of St Giles was appointed in 1547, and the phrase, 'in the fields', was added to the church's name. An illustration from this time shows the church with a round tower and dome. A spire replaced this structure in 1617.

The early church fell into disrepair and a Gothic brick structure was built between 1623 and 1630, mostly paid for by the Duchess of Dudley, the wife of Sir Robert Dudley. The new building was consecrated by William Laud, Bishop of London. An illuminated manuscript listing the subscribers to the rebuilding, is still kept in the church.

The first victims of the 1665 Great Plague were buried in St Giles's churchyard and by the end of the plague year there were 3,216 listed plague deaths in this church's parish, which had fewer than 2,000 households.

Other notable burials of the period include twelve Roman Catholic martyrs (killed on the testimony of Titus Oates), who were later beatified, and are buried near the church's north wall, these being: 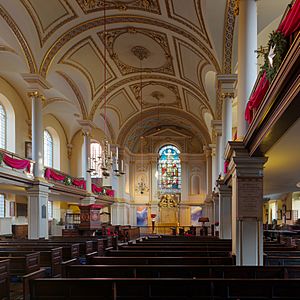 Looking down the aisle, inside the church

The high number of plague victims buried in the church and its yard were the probable cause of the damp problem evident by 1711. The parishioners petitioned the Commission for Building Fifty New Churches for a grant to rebuild. Initially refused because it was not a new foundation, they were eventually allocated £8,000 and a new church was built in 1730-34, designed by the architect Henry Flitcroft in the Palladian style (the first English church in that style). The model he made so that parishioners could see what they were commissioning, can still be seen in the church's north transept. The Vestry House was built at the same time.

As London grew in the 18th and 19th centuries, so did the parish's population, to 30,000 by 1831. The parish included within its boundaries two neighbourhoods notorious for poverty and squalour: the Rookery between the church and Great Russell Street, and Seven Dials. St Giles's Roundhouse was a jail and St Giles' Greek a thieves' cant. As the population grew, so did their dead, and eventually there was no room in their grave yard, so during the eighteenth and nineteenth centuries, many were buried in the cemeteries surrounding St Pancras.

St Giles was also the last church on the route between Newgate Prison and the gallows at Tyburn, and the churchwardens paid for the condemned to have a drink (popularly named "St Giles' Bowl") at the next door pub, the Angel, before they went to be hanged, a custom that had started in the early 15th century. The dissolute nature of the area is described in Charles Dickens' Sketches by Boz.

The architects Sir Arthur Blomfield and William Butterfield made some alterations in 1875 and 1896. St Giles escaped severe bombing in the Second World War, losing only most of the Victorian glass. The church underwent a major restoration in 1952–53, described by journalist and poet John Betjeman as "one of the most successful post-war church restorations" (Spectator 9 March 1956). The parish today sits in the middle of a commercial district, and the resident population is about 4,600.

The church was designated a Grade I listed building on 24 October 1951. 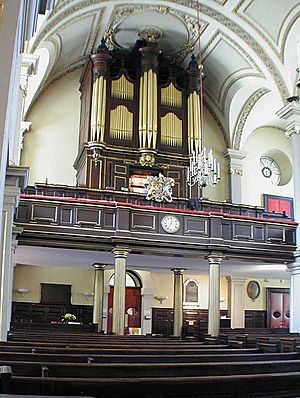 The West side of the interior, showing the organ.

The first seventeenth-century organ was destroyed during the English Civil War. George Dallam built a replacement in 1678; the instrument was rebuilt in 1699 by Christian Smith, a nephew of the great organ builder 'Father' Smith. A second rebuilding (in the new structure) was done in 1734 by Gerard Smith the younger, possibly assisted by Johann Knopple. Much of the pipework from 1678 and 1699 was recycled.

The final rebuilding, still recycling the original pipes, was done in 1856 by the London organ builders Gray & Davison, then at the height of their fame. The mechanical key and stop actions were replaced with an electro-pneumatic action in 1960, and the organ was extensively restored in 2006 by WIlliam Drake.

St Giles is known as 'The Poets' Church'. Poet John Milton's daughter Mary was baptised in the Gothic brick building in 1647 and the Poetry Society holds its annual general meeting in the vestry house. Two memorials inside the church commemorate George Chapman, the translator of Homer (buried outside) and politician and poet Andrew Marvell.

Other famous people with memorials in St Giles include:

The wooden pulpit on the north side of the church is from the nearby (now no longer a church) West Street Chapel and is the same pulpit from which Methodist founders John and Charles Wesley preached between 1741 and 1793.

The two paintings of Moses and Aaron on either side of the altar are by Francisco Vieira the Younger, court painter to the King of Portugal.

The mission of the Church of St Giles-in-the-Fields is to reflect the love of God given through Jesus Christ for the life of the world; to offer reverent and uplifting worship and prayer, to practice hospitality and encourage community, and to serve the pastoral and spiritual needs of all who live, work and pass through our parish. The church is one of the few churches within Central London to use the Book of Common Prayer and King James Version for all main services.

The church is open daily for quiet prayer and reflection with morning and evening prayer being said at 8.15am and 5.30pm. On Sundays, three services are held: said Holy Communion at 9am, Sung Eucharist at 11am and Evensong at 6.30pm.

Church music is provided by a professional quartet of singers at Sunday morning services and a voluntary choir at Evensong. The voluntary choir, open to all, sings regularly on Sunday Evenings and has up to 24 members. The choir was started in 2005 by the current Director of Music, Jonathan Bunney. The voluntary choir has sung at Guildford Cathedral and further cathedral visits are planned for the future.

St Giles is pleased to play host to companion groups who provide food and drink for the body, mind and spirit. From 2pm to 4pm on Saturdays and from 1.15pm to 3.15pm on Sundays the Simon Community hold a mobile street café in the north churchyard to dispense tea, coffee, sandwiches, fruit, cake and words of advice, seeking to reach out to the most unreachable. During the week, various self-help groups, such as Alcoholics Anonymous and Narcotics Anonymous, meet upon church premises to assist those with addictions.

All content from Kiddle encyclopedia articles (including the article images and facts) can be freely used under Attribution-ShareAlike license, unless stated otherwise. Cite this article:
St Giles in the Fields Facts for Kids. Kiddle Encyclopedia.