Finsbury is a district of Central London, forming the south-eastern part of the London Borough of Islington. It borders the City of London.

The Manor of Finsbury is first recorded as Vinisbir (1231) and means "manor of a man called Finn". Finsbury lay just outside Cripplegate (and on its later construction, Moorgate) in London Wall. At that time, much of the manor was part of the "great fen which washed against the northern wall of the City".

The area should not be confused with Finsbury Park, a public space roughly 3 miles (5 km) to the north, which gives its name to its surrounding mainly residential area.

The name is first recorded as Vinisbir (1231) and means "manor of a man called Finn". 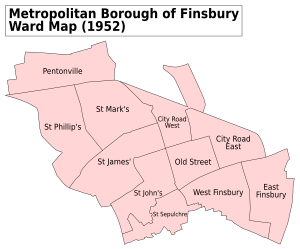 In the Middle Ages Finsbury was part of the great fen which lay outside the walls of the City of London. It gave its name to the Finsbury division of the Ossulstone hundred of Middlesex. In the early 17th century trees were planted and gravel walks made, and the area became a place for recreation. In 1641 the Honourable Artillery Company moved to Finsbury, where it still remains, and in 1665 the Bunhill Fields burial ground was opened in the area. The City of London Yeomanry (COLY) also had its headquarters in nearby Finsbury Square when founded at the time of the Second Boer War.

Building on Finsbury Fields began in the late 17th century. The parish church of St Luke's was built in 1732–33, and at the end of the 18th century a residential suburb was built with its centre at Finsbury Square.

The Metropolitan Borough of Finsbury in the County of London was created in 1900, covering the area of Finsbury and Clerkenwell. In 1938, Dr. Chuni Lal Katial was elected mayor of Finsbury, making him the first Asian mayor in the United Kingdom. In 1942 the borough council erected a controversial statue of Vladimir Lenin in Holford Square (now demolished). The borough was abolished in 1965 and absorbed into the borough of Islington.

The name Finsbury is now most often used of the western part of the district, historically regarded as part of Clerkenwell, which is the home of the former Finsbury Town Hall, Finsbury Estate, Exmouth Market, the Sadler's Wells Theatre, Islington Local History Centre, Islington Museum and City University.

All content from Kiddle encyclopedia articles (including the article images and facts) can be freely used under Attribution-ShareAlike license, unless stated otherwise. Cite this article:
Finsbury Facts for Kids. Kiddle Encyclopedia.