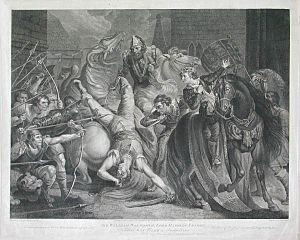 Walter "Wat" Tyler (c.1320/4 January 1341 – 15 June 1381) was a leader of the 1381 Peasants' Revolt in England. He marched a group of rebels from Canterbury to London to oppose the institution of a poll tax and to demand economic and social reforms. While the brief rebellion enjoyed early success, Tyler was killed by officers loyal to King Richard II during negotiations at Smithfield, London.

All content from Kiddle encyclopedia articles (including the article images and facts) can be freely used under Attribution-ShareAlike license, unless stated otherwise. Cite this article:
Wat Tyler Facts for Kids. Kiddle Encyclopedia.