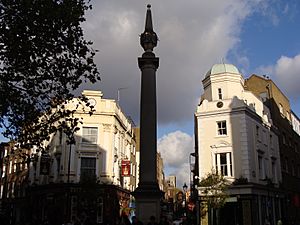 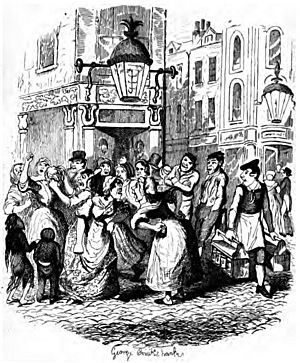 Seven Dials around 1836: illustration by George Cruikshank in Dickens' Sketches by Boz 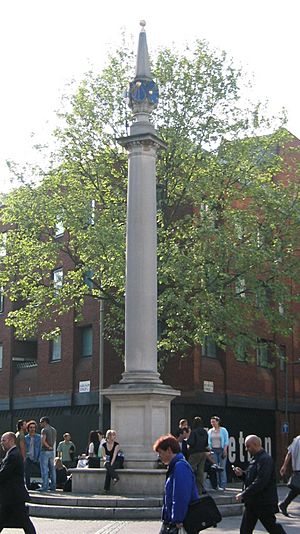 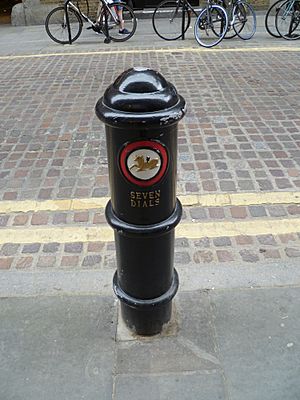 Seven Dials is a small road junction in Covent Garden in the West End of London where seven streets converge. At the centre of the roughly circular space is a column bearing six sundials, a result of the column being commissioned before a late-stage alteration of the plans from an original six roads to seven.

The term also refers informally to the immediate surrounding area.

The landed estate formally belonged to the Worshipful Company of Mercers which allowed building licences on what was open farmland to maximise their income in what was the burgeoning West End of the developing metropolitan area. The original layout of the Seven Dials area was designed by Thomas Neale in the early 1690s. The original plan had six roads converging, although this was later increased to seven. The sundial column was built with only six faces, with the column itself acting as the gnomon of the seventh dial. This number of roads was chosen in order to maximise the number of houses that could be built on the site.

After the successful development of the Covent Garden Piazza area nearby, Neale hoped that Seven Dials would be popular with well-off residents. This was not to be and the area gradually deteriorated. At one stage, each of the seven apexes facing the column housed a pub. By the 19th century, Seven Dials was among the most notorious slums in London, as part of the rookery of St Giles. The area was described by Charles Dickens in his collection Sketches by Boz, which remarks,

The stranger who finds himself in the Dials for the first time...at the entrance of Seven obscure passages, uncertain which to take, will see enough around him to keep his curiosity awake for no inconsiderable time...

The relatively low status of the location is also stated by W. S. Gilbert in the operetta Iolanthe

Hearts just as pure and fair
May beat in Belgrave Square
As in the lowly air of Seven Dials.

It remained a byword for urban poverty in the early 20th century, when Agatha Christie set The Seven Dials Mystery (1929) there.

The original sundial column was removed in 1773. It was long believed that it had been pulled down by an angry mob, but recent research suggests it was deliberately removed by the Paving Commissioners in an attempt to rid the area of "undesirables". The remains were acquired by architect James Paine, who kept them at his house in Addlestone, Surrey, from where they were bought in 1820 by public subscription and re-erected in nearby Weybridge as a memorial to Princess Frederica Charlotte of Prussia, Duchess of York and Albany.

In the 1840s Seven Dials was a focal point for the Chartists in their campaign for electoral reform. However, the intended uprisings there were thwarted by police infiltrators.

Today Seven Dials is a prosperous, largely commercial neighbourhood in the WC2 postcode area between the West End theatre district of Shaftesbury Avenue and the fashionable shopping district around nearby Neal's Yard. It is dominated by generally slow-moving traffic in the narrow streets, which are usually crowded with people.

On one of the seven apexes remains a pub, The Crown. On another apex is the Cambridge Theatre, and on a third the Radisson Edwardian Mercer Street Hotel. On another is the Comyn Ching Triangle, a block of old buildings renovated in the 1980s. Despite some redevelopment, many original buildings remain.

The replacement sundial column was installed in 1988–89 to the original design. It was unveiled by Queen Beatrix of the Netherlands on a visit to commemorate the tercentenary of the reign of William and Mary, during which the area was developed.

Monmouth Street is the only street in Seven Dials to have a number; the B404. The others are unclassified.

Neale commissioned Edward Pierce, the architect and stonemason, to design and construct a sundial pillar in 1693-94. The original drawing in brown ink with a grey wash is in the British Museum collection

On top of an 8 feet (2.4 m) high plinth, there is a 20 feet (6.1 m) high Doric column. The sculpture that contains the six sundials and the pinnacle is 10 feet (3.0 m). This block is orientated so there are a direct south and direct north vertical dial, and four vertically declining dials. The monument was erected in 1694, but removed in 1773. The replica was commissioned in 1984 and erected in 1989 The dials were designed, carved and gilded by Caroline Webb, while the astronomer Gordon Taylor verified the maths. Each faces is accurate within ten seconds.

Seven Dials is predominantly owned by Shaftesbury PLC, which also have a joint venture with the Worshipful Company of Mercers at the adjoining St Martin's Courtyard.

All content from Kiddle encyclopedia articles (including the article images and facts) can be freely used under Attribution-ShareAlike license, unless stated otherwise. Cite this article:
Seven Dials, London Facts for Kids. Kiddle Encyclopedia.