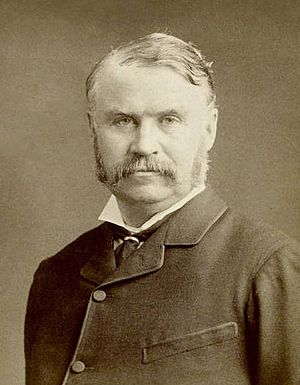 Sir William Schwenck Gilbert (18 November 1836 – 29 May 1911) was an English dramatist, librettist, poet and illustrator. He is best known for the comic operas (or operettas) that he wrote with Sir Arthur Sullivan.

Gilbert worked in the civil service for a few years, but he did not like it. He studied law and became a lawyer, but not many people hired him. To make more money, he wrote short stories and comic poems for magazines. He also worked as a theatre critic. Gilbert made drawings for some of his poems and signed them "Bab", a nickname he had when he was a baby. Those poems became known as "The Bab Ballads" and were very popular.

In the 1860s Gilbert started writing plays. At first he wrote parodies of other writers' plays and operas, but soon he developed his own way of writing. Gilbert wrote many plays; most of them are not performed anymore, but Engaged (1877), about a man who proposes marriage to every woman he meets, is still performed.

In 1871 Gilbert started working with Sullivan. They wrote fourteen comic operas together; Gilbert wrote the words and Sullivan wrote the music. Their fourth opera, H.M.S. Pinafore (1878), made the team of "Gilbert and Sullivan" famous all over the English-speaking world. Besides Pinafore, their best-known operas are The Pirates of Penzance (1879) and The Mikado (1885). The Gilbert and Sullivan operas are still performed very often, by opera companies, theatre companies, and groups in schools and colleges.

Gilbert and Sullivan sometimes argued about what to write and how to write it, but they worked together for 25 years, from 1871 to 1896. When they were angry with each other, they wrote operas with other people, but those operas did not make as much money as the operas they wrote together. When Sullivan died in 1900, Gilbert stopped writing operas.

Gilbert directed his own plays and operas. He wanted the actors to talk in a natural way, and not shout as if they were giving a speech to a big crowd. Gilbert's ideas helped other playwrights, like Oscar Wilde and George Bernard Shaw, to make their plays more real.

All content from Kiddle encyclopedia articles (including the article images and facts) can be freely used under Attribution-ShareAlike license, unless stated otherwise. Cite this article:
W. S. Gilbert Facts for Kids. Kiddle Encyclopedia.