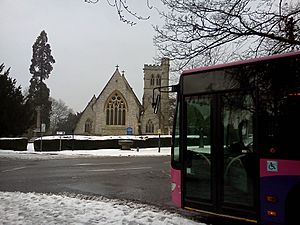 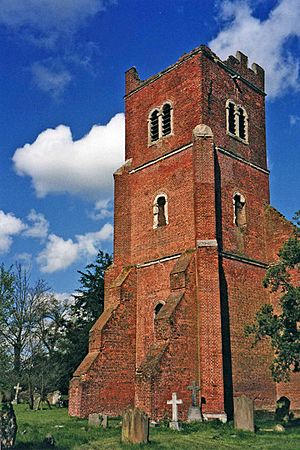 The original Stanmore church, located on Old Church Lane, was consecrated in the name of St. Mary. It remained the village church until 1632, when it was replaced, and thereafter fell into ruin and was taken down. As of the late twentieth century, a single tomb survived in the back garden of a local house.

The 1632 church, located nearer to what had become the village centre, was paid for by merchant Sir John Wolstenholme and consecrated by William Laud, then Bishop of London. It is in red brick. 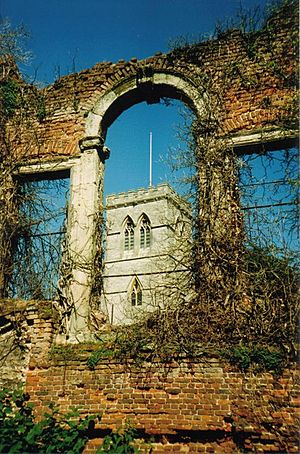 With growing population, a third church building was constructed in 1850. The 1632 church thereafter was partially demolished and became a ruin; it is now Grade II* listed.

Burials in the churchyard include writer W. S. Gilbert and the Prime Minister George Hamilton-Gordon, the Earl of Aberdeen.

The present church is built of Kentish rag and Bath stone, and was designed in an Early Decorated Gothic style by the Surrey architect Henry Clutton. It was built by the Lambeth builder George Myers. The church of Saint Mary the Virgin in Ewell had just been completed by Clutton and formed a prototype for St John's. The new church cost £7,855; £1,000 of which had been donated by its rector, Douglas Gordon. Gordon was the son of the Earl of Aberdeen; his lordship had also donated £2,000 to the church. It was consecrated on 16 July 1850 by the Bishop of Salisbury, Edward Denison.

The land on which the church stands was donated by Colonel Hamilton Tovey Tennent. The foundation stone for the new church was laid by the Earl of Aberdeen in the presence of Queen Adelaide, the widow of King William IV. The former queen was resident at Bentley Priory, and this was her last public appearance. Queen Adelaide donated the font to the church and the east window was subsequently dedicated to her memory.

All content from Kiddle encyclopedia articles (including the article images and facts) can be freely used under Attribution-ShareAlike license, unless stated otherwise. Cite this article:
St John the Evangelist, Great Stanmore Facts for Kids. Kiddle Encyclopedia.