Sir John Vanbrugh (24 January 1664 (baptised) – 26 March 1726) was an English architect and dramatist, perhaps best known as the designer of Blenheim Palace and Castle Howard. He wrote two Restoration comedies, which have become enduring stage favourites but originally had much controversy. He was knighted in 1714.

Vanbrugh was a radical throughout his life. As a young man and a committed Whig, he was part of the scheme to overthrow James II, put William III on the throne and protect English parliamentary democracy, and he was imprisoned by the French as a political prisoner. 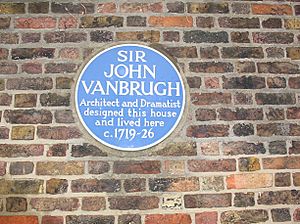 As an architect (or surveyor, as the term then was) Vanbrugh is thought to have had no formal training. To what extent Vanbrugh's exposure to contemporary French architecture during years of imprisonment in France affected him is hard to gauge, in April 1691 he was transferred to Château de Vincennes in the months he spent as a prisoner there he would have got to know the architect Louis Le Vau's grand classical work (1656–61) in the château well. On his release from prison (he was at the Bastille by then) on 22 November 1692 he spent a short time in Paris, there he would have seen much recent architecture.

His inexperience was compensated for by his eye for perspective and detail. During his almost thirty years as a practising architect, Vanbrugh designed and worked on numerous buildings.

Vanbrugh's chosen style was the baroque, which had been spreading across Europe during the 17th century. Vanbrugh transformed European baroque's metamorphosis into an almost understated version that became known as English baroque. Four of Vanbrugh's designs act as milestones for this process:

In 1719, at St Lawrence Church, York, Vanbrugh married Henrietta Maria Yarburgh of Heslington Hall, York. This was by all accounts a happy marriage, which produced two sons.

Vanbrugh died "of an asthma" on 26 March 1726, in the modest town house designed by him in 1703 out of the ruins of Whitehall Palace. His married life, however, was mostly spent at Greenwich in the house on Maze Hill now known as Vanbrugh Castle, a miniature Scottish tower house designed by Vanbrugh in the earliest stages of his career. A Grade I listed building, and formerly a RAF Boys' School, it is today divided into private apartments.

All content from Kiddle encyclopedia articles (including the article images and facts) can be freely used under Attribution-ShareAlike license, unless stated otherwise. Cite this article:
John Vanbrugh Facts for Kids. Kiddle Encyclopedia.