Kids Encyclopedia Facts
For the larger local government district, see London Borough of Harrow. For the historic part, see Harrow on the Hill.

Harrow () is a large town in Greater London, England, and serves as the principal settlement of the London Borough of Harrow. Lying about 10.5 miles (16.9 km) north-west of Charing Cross and 5.4 miles (8.7 km) south of Watford, the entire town including its localities had a population of 149,246 as of the 2011 census, whereas the wider borough (which also contains Pinner and Stanmore) had a population of 250,149.

The historic centre of Harrow was atop the 408 feet (124 m) Harrow Hill. The modern town of Harrow grew out at the foot of the settlement, in what was historically called Greenhill. With the arrival of the Metropolitan Railway in the 19th century, the centre of Harrow moved to Greenhill and it grew as the unofficial "capital" of the Metroland suburbia in the early 20th century; Harrow-on-the-Hill station is on one of the railway corridors between London and the Chilterns. Meanwhile, Harrow & Wealdstone station is on the West Coast Main Line and is the eighth oldest railway station, having opened in 1837 one and a half mile north of the hill. Workers were drawn to the area by the opening of several factories in Wealdstone; Harrow was the base of the large Kodak factory, used for the manufacture of photographic materials and R&D, which was in operation for more than a century.

Historically in the hundred of Gore, county of Middlesex, the merged Harrow was a municipal borough before it became a part of Greater London in 1965. Today, the historic area is distinguished as Harrow on the Hill and is a conservation area with listed buildings of Georgian architecture and home to Harrow School, one of the seven major boys' boarding schools in England as defined by the Public Schools Act 1868. The modern-day town meanwhile is an established commercial centre of outer north-west London and houses a campus of the University of Westminster.

Harrow's name comes from Old English hearg = "(heathen) temple", which was probably on the hill of Harrow, where St. Mary's Church stands today. The name has been studied in detail by Keith Briggs.

The first and only contemporary artist-led gallery in Harrow was set up in 2010 by the Usurp Art Collective. The space is called the Usurp Art Gallery & Studios and is based in West Harrow, a bohemian part of Harrow. Usurp Art provides professional support to artists and runs the only public artists studios in the borough. It is a flagship project for Arts Council England.

Main page: Harrow on the Hill

Harrow proper is identified as one of the 11 Metropolitan centres in the London Plan. 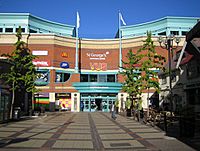 Harrow historically included Harrow on the Hill, which sits on top of an outlying knoll and is contiguous with the centre of Harrow. Much of Kenton and before 1716 all of Pinner were parts of Harrow, geographical facts which root the importance of Harrow as a meeting place and a place of business. Harrow Weald, is the district north of Wealdstone, both of which were historically also part of Harrow. Harrow may also include the wards of Roxeth, Marlborough, Headstone North and Harrow on the Hill as well as the Greenhill, West Harrow and Headstone South wards listed above. The combined population of these wards is 80,213 (2011). 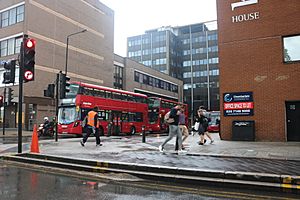 Pedestrians and buses near the bus station

The town includes its localities within the Harrow post town: Harrow on the Hill, Harrow Weald, Headstone, North Harrow, Kenton, Rayners Lane, South Harrow, Wealdstone and West Harrow. The Borough's population was 250,149 in 2011.

Harrow Borough's proportion of Jewish, Muslim and Hindu residents is above average. The ethnic minority population includes a large and established Gujarati Indian community, who originally settled in large numbers in the borough after their expulsion from Uganda in 1972.

The highest life expectancy (as of 2009–2013) for females was 89.5 years in Headstone North, and for males was 83.8 years in West Harrow. The lowest expectancies were 82.4 years in Wealdstone and 78.6 years in Greenhill respectively. The median age was highest in Headstone North (40 years) and lowest in Greenhill and Wealdstone (both 33 years). The life expectancies for Harrow are lower than both Pinner and Stanmore in the borough.

According to a 2018 survey by the Office for National Statistics (ONS), the borough of Harrow was the "happiest" in London and scored higher than the English average. Adversely, in another survey by an estate agent in 2019 the borough was found to be the "least friendly" in London. 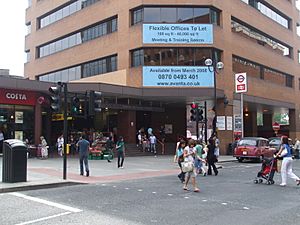 Harrow is twinned with:

Station Road in Harrow, with the former Debenhams department store on the left hand side (due to become The Landmark from October 2021)

Central Harrow forms a commercial hub in the north-west of Greater London, with many retail outlets and commercial offices, and increasingly residential apartments in more recent regeneration schemes. Harrow is classified as one of 13 metropolitan centres in the London Plan.

The area has two shopping centres, St Anns and St George's, containing chain stores typical of British high streets. There are also parades of shops throughout Station Road and the ascending, traditional College Road, and over 300 metres (980 ft) of a fully pedestranised shopping/café streets roads (north of St Anns). A large Debenhams department store (174,000 square feet (16,200 m2) of floorspace) was on Station Road. After Debenhams was liquidated, the site is to become an independent department store called The Landmark due to open on 14 October 2021. There are also large Morrisons and Tesco superstores. As of 2012, Harrow has 1,128,050 square feet (104,799 m2) of total town centre floorspace, the lowest of London's metropolitan centres.

Yates's public house in Station Road (today The George) - it was originally purpose built Woolworths store in 1930, closing in 1996 as the retailer moved to St George's centre

The creation of St George's in 1996, less than a decade after St Anns, gave Harrow a stronger competitive retail standing. On one index, the town centre's league position went from 106th (out of 1,000) to 71st (out of 1,400) from the mid-1980s to mid-1990s. Harrow's competing shopping centres were recognised to be Watford, Uxbridge and Brent Cross Shopping Centre. A 2003 council report showed that Harrow was less competitive as a retail centre by comparison.

In 2015, Harrow ranked 99th in the Hot 100 UK retail locations published by CACI; it was 5th in Greater London, behind Croydon, Kingston upon Thames, Bromley and Enfield Town. In 2018, Harrow was ranked 59th in the nationwide "High Street Investment Ranking" carried out by Knight Frank, and 6th in Greater London beaten by Uxbridge and Richmond.

The Wealdstone district has a strong industrial connection, having been the location for the manufactures Winsor & Newton (artists' materials), Whitefriars Glass, and Kodak.

See also: List of schools in the London Borough of Harrow

The John Lyon School - the building dates to the 1870s

Harrow is best known for Harrow School. An independent boarding school for boys, founded in 1572, Harrow School is considered one of the finest secondary schools in the world. The nearby John Lyon School is another boys' independent school, while another known school is the North London Collegiate School for girls located further in the borough in Edgware.

Harrow is also home to a large University of Westminster campus, located near Northwick Park and the hospital. It serves as the university's base for Media, Arts and Design. The school dates back to 1897 specialising in art, photography and fashion, becoming a college in the 1960s under the name Harrow College of Higher Education. It merged with Polytechnic of Central London (PCL) in 1990, now known as the University of Westminster.

Greenhill School was built in the 1880s, but the building was demolished in 1967 to make way for shops on St Anns Road. The site is now home to a Marks & Spencer.

Main page: List of people from the London Borough of Harrow

Some notable people who were born and/or grew up in the Borough of Harrow are shown below.

All content from Kiddle encyclopedia articles (including the article images and facts) can be freely used under Attribution-ShareAlike license, unless stated otherwise. Cite this article:
Harrow, London Facts for Kids. Kiddle Encyclopedia.