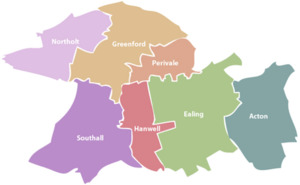 Map of the London Borough of Ealing, showing Greenford and the other seven "towns" which make up the borough.

Greenford is a suburb in the London Borough of Ealing in west London, England, lying 11 miles (18 km) west from Charing Cross. It has a population of 46,787 inhabitants, or 62,126 with the inclusion of Perivale.

Nearby places include Yeading, Hanwell, Perivale, Southall, Northolt, Ealing, Sudbury and Sudbury Hill. The most prominent landmark in the suburb is Horsenden Hill, 279 feet (85 m) above sea level.

Greenford covers a large area, including the two miles of Greenford Road, giving it three localities: North Greenford, Greenford Green, and Greenford Broadway – this is also reflected in the names of the electoral wards. Though a separate "town" within the borough of Ealing, the Royal Mail includes Perivale within the Greenford post area and as such the two share the UB6 postcode.

The name is first recorded in 848 as Grenan forda. It is formed from the Old English 'grēne' and 'ford' and means 'place at the green ford'. Greenford was known as Great Greenford in order to distinguish it from Little Greenford, which is now known as Perivale. The affixes 'Magna' and 'Parva' have also been used to denote the difference.

Greenford is considered to be birthplace of the modern organic chemical industry, as it was at William Perkin's chemical factory in North Greenford, by the Grand Union Canal, that the world's first aniline dye was discovered in March 1856. Perkin called his amazing discovery 'mauveine'. Today there is a blue plaque marking the spot in Oldfield Lane North, just south of the Black Horse public house. Until 2013/14, Greenford was the home to the Hovis factory. The former Rockware glassworks on the canal is commemorated by Rockware Avenue. Greenford formed part of Greenford Urban District from 1894 to 1926 and was then absorbed by the Municipal Borough of Ealing. 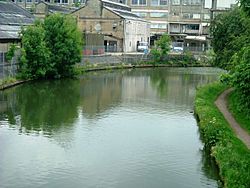 A modern view of the Grand Union Canal through Greenford, with the former J.Lyons & Co. factory in the background
Main page: J. Lyons and Co., Greenford

Post First World War, tea blender and food manufacturer J. Lyons and Co. were looking for a secondary site on which to expand production beyond Cadby Hall, Hammersmith. In 1921 they bought the first piece of an eventual 63 acres (25 ha) site, due to its location close to good transport links from both the Grand Union Canal and the Great Western Railway's Great Western Main Line, and the West Coast Main Line and onwards to the Midlands at Willesden Junction.

The factory officially opened in July 1921, with the first single-storey buildings known as "Zig-Zag" due to their northern light-aligned windows allowing maximum light into the production area. There were steam and electrical power plants on site, which powered both the plant as well as the staff canteen and medical facilities, accessible to all plant employees and their dependants. Transport docks and a canal basin had been developed, allowing shipment of tea and coffee directly from London Docks into HM Customs excise controlled bonded warehouses. The extensive onsite railway infrastructure allowed precise positioning of heavy raw goods into the factory, as well as the extraction of finished product. Lyons bought their own steam shunters to move wagons between the GWR exchange sidings and the factory system.

Lyons quickly became Greenford's biggest employer. A later pioneer in electronic machines and computing, Lyons deployed the latest factory automation technology, making Greenford a showplace that was regularly visited by the media, academics, competitors and royalty, with more than one visit by King George V and Queen Mary. In the 1950s, the site developed the breakfast cereal Ready Brek. Areas of the site not initially developed for factory use were landscaped, with many trees planted. As the factory developed these diminished, particularly after the development of the Lyons Maid Bridge Park factory in the 1950s, and the new administration block in 1971.

After the merger of Lyons with Allied Bakeries in the 1980s, and the focus of the new Allied Domecq business to focus on spirits, with the sell-off of the businesses associated with the factory, the need for the facility dwindled. Redeveloped from 1998, today it is known as Lyon Way Industrial Estate.

Five hundred yards north east from William Perkin's dye factory was a triangular field in which he kept horses. On this ground was built the Oldfield Tavern public house, which became a popular venue for a rock group called the Detours, who met a drummer there called Keith Moon. On Thursday 20 February 1964 they were introduced to the audience of the Oldfield Tavern as the Who. (The tavern has not survived, however, and has since been replaced by a small block of flats and a Texaco petrol station). Andy Locke, Dave Kerr-Clemenson and Wal Scott were all in Edison Lighthouse, and with chart-topping Love Grows all came from Greenford. 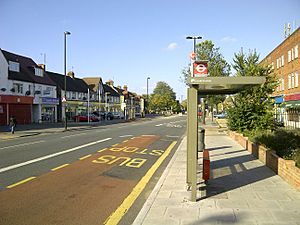 The A40, a major dual-carriageway, serves the area.

North Greenford is served by Sudbury Hill station on the Piccadilly line and Greenford on the Central line. 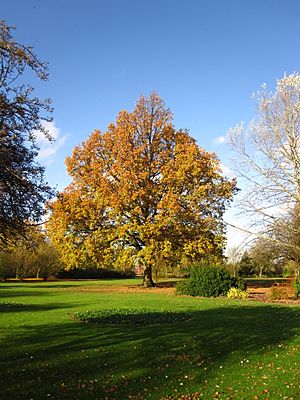 Greenford and South Greenford stations are served by Great Western Railway services on the Greenford branch line to West Ealing.

The grounds of the former Ravenor Farm has become Greenford's largest park. It is the venue for the annual Greenford Carnival, which is held every July.

Until 1910, the land that formed Ravenor Farm/Ravenor Park was a detached part of Northolt parish, with the tithes to the land going to St. Mary's Church, Northolt and not the Greenford parish of Holy Cross.

There are also the Northala hills near Northolt.

The Greenford Park Trotting Track was a pioneer speedway venue and open meetings were staged 1928–1930. The track would be called a long track now, as it was of the order of half a mile/800 metres per lap. The trotting track was situated on the south side of Birkbeck Avenue, just north of the A40 Western Avenue.

Greenford Heritage Centre: a cornucopia of British-made domestic paraphernalia of 20th century is on display - a variety of household items that were commonly found in British homes and gardens in the past.

London Motorcycle Museum is the capital's only motorbike museum, opening in 1999 with a display of around 60 exhibits and now have around 200 exhibits on display including a wide range of bikes & memorabilia as well as knowledgeable staff.

Political status of Ealing Council after the May 2014 local elections:

Greenford is in the London Assembly constituency of Ealing and Hillingdon which has one assembly member: Onkar Sahota (Labour), who was elected in May 2012. 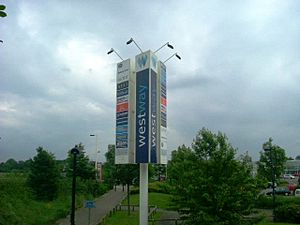 In Greenford Green in front of the train station is the large Westway Cross Shopping Park. This retail park has many stores such as Next, Smyths Toys and Sports Direct.

Greenford is covered by three electoral wards of the London Borough of Ealing, together counting a population of 46,787 as of the 2011 UK census.

All content from Kiddle encyclopedia articles (including the article images and facts) can be freely used under Attribution-ShareAlike license, unless stated otherwise. Cite this article:
Greenford Facts for Kids. Kiddle Encyclopedia.