Yeading ( YED-ing) is a settlement in west London, forming part of the London Borough of Hillingdon, having been developed after the Second World War.

Yeading is very early Saxon and was originally Geddingas or Geddinges, meaning "the people of Geddi".

The earliest surviving documented allusion to Yeading dates from 757 AD, in which year Æthelbald of Mercia made a land grant which mentioned Geddinges (Yeading) and Fiscesburne (Crane or Yeading Brook). The first land grant including Yeading was made by Offa in 790 to Æthelhard, Archbishop of Canterbury: "in the place called on linga Haese [Hayes] and Geddinges [Yeading] around the stream called Fiscesburna [Crane or Yeading Brook]."

Anglo-Saxon settlement in Yeading therefore seems probable, but the history of Yeading in subsequent centuries is not as clear as that of Hayes. Such details as the names of many Yeading manor holders remain unknown.

Yeading Dock was one of many docks built along the Grand Union Canal in the 19th and early 20th centuries. The main industry in Hayes and Yeading at this time was brickmaking, and the canal provided a reliable way of transporting larger numbers of bricks. Yeading's brickworkers could be known to keep pigs as a second source of income. A bourgeois writer, one Elizabeth Hunt, wrote in 1861 that in "Yeading dirt, ignorance and darkness reign supreme." In 1874, however, one James Thorne wrote that the inhabitants of Yeading were "always found civil".

Yeading was still not developed in the 1920s. Yeading Lane was often flooded, and access beyond Yeading to Northolt seems to have been by footpath only before the First World War. During the War, a properly constructed road was built linking the Great Western Railway station at Hayes with the L.N.E.R. line at Northolt. Yeading was still mainly a rural area.

After the Second World War, a large prefab estate was erected in Yeading. By 1956, Yeading's Tilbury Square was still without gas and electricity, and oil stoves and open fires were still used; the public house The Willow Tree, reputedly some 400 years old (now demolished), was lit by three cylinders of calor gas. The Yeading Lane estate underwent largescale development in the late 1960s and '70s. 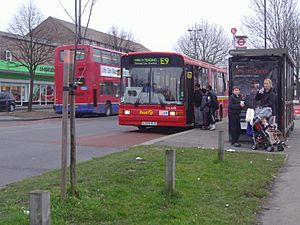 A local bus on Yeading Lane

Pubs in Yeading include:

Schools in Yeading include:

All content from Kiddle encyclopedia articles (including the article images and facts) can be freely used under Attribution-ShareAlike license, unless stated otherwise. Cite this article:
Yeading Facts for Kids. Kiddle Encyclopedia.