Wembley is derived from the Old English proper name "Wemba" and the Old English "Lea" for meadow or clearing. The name was first mentioned in the charter of 825 of Selvin. King Beornwulf.

The village of Wembley grew up on the hill by the clearing with the Harrow Road south of it. Much of the surrounding area remained wooded. In 1547 there were but six houses in Wembley. Though small, it was one of the wealthiest parts of Harrow. At the dissolution of the monasteries in 1543, the manor of Wembley fell to Richard Andrews and Leonard Chamberlayne, who sold it to Richard Page, Esq., of Harrow on the Hill, the same year.

The Page family continued as lords of the manor of Wembley for several centuries and eventually commissioned Humphry Repton(1752-1818) the landscape gardener to design what is now Wembley Park. Wembley Park thus derived its name from Repton's habit of referring to the areas he designed as "parks".

There was a mill on Wembley Hill by 1673. In 1837, the London and Birmingham Railway (now part of the West Coast Main Line) was opened from London Euston through Wembley to Hemel Hempstead, and completed to Birmingham the following year. The changing names of the local station demonstrated the increasing importance of the 'Wembley' name. 'Sudbury' station opened in 1845, renamed as 'Sudbury and Wembley' in 1882, renamed as 'Wembley for Sudbury' in 1910, renamed as 'Wembley Central' in 1948, at the time of the Olympic Games.

To modernise the service, a new Watford DC Line was built alongside the main lines and Bakerloo line trains, and electric trains to Broad Street started in 1917. Electric trains to London Euston began running in 1922. Since 1917, there have been six platforms at what is now Wembley Central station. In 1880, the Metropolitan Railway opened its line from Baker Street through the eastern side of Wembley, but only built a station, Wembley Park, in 1894. There are now three physically separate services, the London to Aylesbury Line, the Metropolitan line, and the Jubilee line. Only the latter two services have platforms at Wembley Park station.

In November 1905, the Great Central Railway (now, in this section, part of the Chiltern Main Line) opened a new route for fast expresses that by-passed the congested Metropolitan Railway tracks. It ran between Neasden Junction, south of Wembley, and Northolt Junction, west of London, where a new joint main line with the Great Western Railway began. Local passenger services from Marylebone were added from March 1906, when new stations were opened, including 'Wembley Hill', next to what later became the site of Wembley Stadium - the national stadium of English sport - which opened for the FA Cup Final of April 1923, remaining open for 77 years until it closed for reconstruction in October 2000. After a long planning and redevelopment process dogged by a series of funding problems and construction delays, the new stadium finally opened its doors in March 2007.

Wembley Hill station was renamed 'Wembley Complex' in May 1978, before getting its present name of 'Wembley Stadium' in May 1987.

The area around the current Wembley Stadium was the location of the British Empire Exhibition of 1924-1925. Until the 2000s, remnants of the many reinforced concrete buildings, including the original Wembley Stadium, remained, but nearly all have now been removed, to make way for redevelopment.

Wembley, in common with much of northwest London, had an extensive manufacturing industry, but much of it closed in the 1980s. Factories in the area included Glacier Metals (bearings), Wolf Power Tools, Sunbeam Electrical Appliances, Griffin & George (laboratory equipment) and GEC (whose research laboratories, opened in 1923, were one of the first of their type in the United Kingdom.).

The retail centre of Wembley (the High Road and Ealing Road) has suffered from chronic traffic congestion and from the opening of neighbouring purpose-built shopping centres, first Brent Cross in the early 1970s and later the Harrow and Ealing Broadway Shopping Centres. During the 1960s, rebuilding of Wembley Central station, a block of flats, an open-plan shopping plaza, and a car park were constructed on a concrete raft over the railway.

The shopping plaza suffered a slow decline and was therefore poorly maintained, but it is being redeveloped. The first phase, including construction of eighty-five homes and reconstruction of the plaza, has been completed.

Most of the rest of Wembley's housing consists of inter-war semi-detached houses and terraces and of modern apartment blocks, with a significant minority of detached housing.

Extensive redevelopment has occurred in the Wembley Park area, about a mile northeast from Wembley town centre. 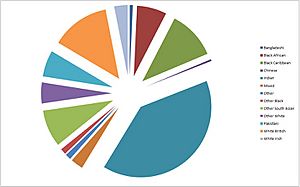 Wembley has a high degree of ethnic diversity, as illustrated by the accompanying pie chart for Wembley Central (ward). According to the 1991 census, 49.2% of the Wembley Cental ward was Asian, with 39% being Indian. The ward along with neighbouring Tokyngton (eastern Wembley) and Alperton were in the top 10 most diverse in London. The white population dropped further to 21.3% by the 2001 census, with 78.6% being of black or minority ethnic (BME) groups.

The White British population of Wembley Central (population 14,727) decreased to only 792 people (5.3% of the population) in the 2011 census. This makes it the sixth least White British ward in London (seventh in the country). Other ethnics include 7.0% Other White, 66.2% Asian (46.2% Indian), and 13.9% Black. Surrounding districts are notably more white and less Asian. Wembley Central only covers Wembley town centre and the whole town is represented by five other wards.

Nearby Sudbury Golf Course backs onto the Grand Union Canal, with its towpath running into central London. Sudbury Squash and Tennis Club has outdoor tennis courts, an indoor squash court, and a clubhouse. Wembley is a short distance away from the Welsh Harp reservoir and open space, created in the early 19th century by damming the River Brent to provide water for the Grand Union Canal.

The area is identified in the Mayor of London's London Plan as one of thirty-five major centres in Greater London.

Wembley is part of both HA0 and HA9 post codes, and has its own post code. It includes Alperton, Preston, North Wembley, South Kenton, Tokyngton, Wembley Park and partly of Sudbury and Northwick Park. 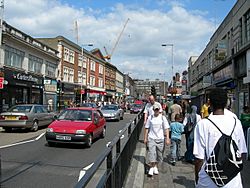 The area's regeneration is one of the major development projects in London in the early 21st century, as specified in the London Plan published by the Mayor of London Ken Livingstone in 2004.

The regeneration project is focused on the site first developed by Sir Edward Watkin as a pleasure ground in the 1890s, and then used for the Empire Exhibition of 1924-5. This area includes Wembley Stadium and Wembley Arena. The 1923 Wembley Stadium closed in October 2000 and was demolished in 2003. The new Wembley stadium was designed by a consortium including engineering consultant Mott MacDonald and built by the Australian firm Multiplex. It cost £798 million and opened in 2007. Grade II-listed Wembley Arena, now the SSE Arena, has been sensitively refurbished in keeping with its Art Deco style.

In 2004 Brent Council approved a mixed use plan by Buro Happold for the development of 55 acres (223,000 m²) adjacent to the stadium, which was presented by Quintain Limited. It is envisaged that the whole of the former British Empire Exhibition site will be redeveloped. At the same time Brent Council is seeking to encourage redevelopment of the neighbouring Wembley town centre area around the High Road.

Wembley has two local non-League football clubs, Wembley F.C. and South Kilburn F.C., that both play at Vale Farm stadium in nearby Sudbury.

There once were two golf clubs in Wembley. Wembley Golf Club, founded in 1896, was situated north of the Metropolitan Railway line in what is now the Fryent Country Park. The club closed in the late 1920s. Wembley Park Golf Club was founded in 1912 in Sir Edward Watkin's Wembley Park pleasure gardens, improving on the 9-hole course that had opened, along with Watkin's Wembley Park, in 1896. The course itself became the site of the British Empire Exhibition.

The prime landmark is Wembley Stadium, rebuilt 2003-2007 at a cost of £827 million, which is approached via the White Horse Bridge designed by the London Eye architects. Nearby is the SSE Arena, a Grade II-listed concert venue built in 1934 as the Empire Pool, a multi-use facility built for the 2nd Empire Games. The former Wembley (later Brent) Town Hall is a Grade II-listed building located on Barn Hill facing Wembley Stadium; it has now been refurbished as a French school, the Lycée International de Londres Winston Churchill. The London Borough of Brent's council chamber and administration have moved to the new Brent Civic Centre in Engineers Way, Wembley Park.

St. Andrew's Presbyterian Church in Ealing Road, Wembley, was built in 1904, designed by Thomas Collcutt and Stanley Hemp. Construction was of brick and the design was influenced by the Arts and Crafts Movement. It was listed as a Grade II building in 1993. The church was converted into the Central Mosque Wembley in the late 1990s.

Brent's only English Heritage blue plaque is on Forty Lane in Wembley, commemorating the comedian and entertainer Arthur Lucan. 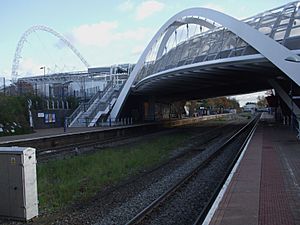 The position of Wembley Park on the Metropolitan line and the suburban development of the surrounding area following the British Empire Exhibition has ensured that Wembley remains an integral part of Metro-land in the popular imagination.

Wembley lies near to the A406 North Circular Road and the Harrow Road passes through its centre. The town centre is served by three pay-and-display car parks.

Wembley Arena is served by Wembley Park Station on the London Underground via Olympic Way, Wembley Stadium on the Chiltern Railways line from London Marylebone to Birmingham Snow Hill, and Wembley Central (walking via the White Horse Bridge). The 92 bus route stops directly outside.

The onsite parking facilities are close by, with a multistorey car park called Red Parking and a surface level car park on the eastern flank of the Stadium called Green Parking. Disabled parking is available at a reduced rate but on a first-come first-served basis.

Three possible transport services have been proposed for the area; the West London Orbital, Fastbus and the North and West London Light railway.

All content from Kiddle encyclopedia articles (including the article images and facts) can be freely used under Attribution-ShareAlike license, unless stated otherwise. Cite this article:
Wembley Facts for Kids. Kiddle Encyclopedia.