London Designer Outlet (abbreviated LDO) is a semi-outdoor shopping centre in Wembley in the London Borough of Brent. Located on Wembley Park Boulevard adjacent to both Wembley Stadium and The SSE Arena, it opened in 2013 as the first outlet centre in Greater London.

As of late 2018, total revenues at London Designer Outlet have risen 97% since its opening, and it attracts 7 million visitors a year. 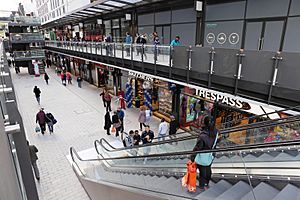 Interior of London Designer Outlet, viewed from the 2nd floor

The Outlet centre consists of some 350,000 sq ft (33,000 m2) which houses over 70 stores and restaurants across three floors, of which around 50 are outlet shops selling goods at a minimum discount of 30% off RRP, though with many outlet stores offering savings of up to 70% off RRP year-round. Along with this the outlet centre also has space for events which is used during seasonal time periods, most recently to screen the Royal Wedding, Wimbledon and the World Cup, though it is also used for music and cultural events as well. LDO's 20 coffee shops and restaurants provide 2,000 covers and there is also a nine-screen, 1,800 seat Cineworld cinema. BREEAM Retail gave it a ‘Very Good’ rating as well as a ‘Very Positive’ on Brent's Sustainable Development Checklist.

London Designer Outlet became the first shopping centre in the UK to offer 'store to door' delivery via DropIt with delivery within 24 hours to any postal code in mainland Britain, for a flat rate of £10.50 for an unlimited number of LDO shopping bags condensed into one delivery.

Wembley Stadium station for Chiltern Railways is located some 300 yards from London Designer Outlet, while Wembley Park tube station on the Jubilee line and Metropolitan line is half a mile away, accessed through Wembley Park Boulevard and Olympic Way. In addition, Wembley Central station for Southern Railways, London Overground, and the Bakerloo line, is also less than a mile from the centre. 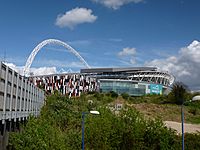 The red-white building here is the LDO car park

LDO has a 1,000-space multi-storey "Red" Car Park, located opposite its main entrance. This car park is also used by Wembley Stadium and The SSE Arena on event days.

All content from Kiddle encyclopedia articles (including the article images and facts) can be freely used under Attribution-ShareAlike license, unless stated otherwise. Cite this article:
London Designer Outlet Facts for Kids. Kiddle Encyclopedia.