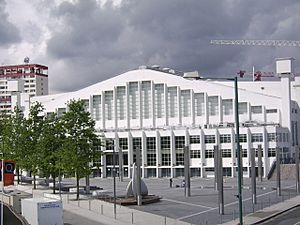 Wembley Arena is an indoor arena in Wembley, London, England. It is next to Wembley Stadium. The arena was built for the 1934 British Empire Games. Originally, it had a large swimming pool, as reflected by its name at the time, Empire Pool. In 1978, it was renamed Wembley Arena. It became one of the best known indoor music venues in England. It seats 12,000. In April 2006 it was refurbished. It was the main stadium for the 1948 Summer Olympics. Since 1934, Wembley has hosted concerts by the world's most famous artists, spanning many different genres of music.

All content from Kiddle encyclopedia articles (including the article images and facts) can be freely used under Attribution-ShareAlike license, unless stated otherwise. Cite this article:
Wembley Arena Facts for Kids. Kiddle Encyclopedia.