Wealdstone is a district located in the centre of the London Borough of Harrow, England. It is located just north of Harrow town centre and is south of Harrow Weald, west of Belmont and Kenton, and east of Headstone. The area accommodates most of Harrow's industrial and business designated land. Wealdstone was the location of the Kodak Harrow factory; it closed in 2016. Wealdstone is centred on the High Street, and much traffic is bypassed from here by the George Gange Way flyover built in 1996. Its western boundary is formed by Harrow View, across which Headstone Manor lies, whereas on the east is Byron Park and the Belmont Trail. Harrow & Wealdstone station and the council offices are located at its southern end.

The eponymous Weald Stone is a sarsen stone, formerly marking the boundary between the parishes of Harrow and Harrow Weald. It is located outside the Bombay Central restaurant, which was a former public house (previously known as the Weald Stone Inn and prior to that, the Red Lion), outside 328 High Road, Harrow Weald. 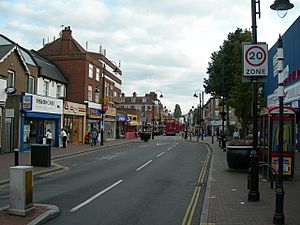 Wealdstone is the youngest ward in the borough of Harrow. It is also the most deprived part of the borough.

According to the 2011 census, the largest ethnic group in Wealdstone ward is White British (25%), followed by 20% Indian and 13% Other Asian. Marlborough ward (which covers southern parts of Wealdstone) was 24% Indian, 23% White British, 11% Other Asian and 10% Other White.

There is one station in the district:

Seven London Buses routes run during day, as well as a school bus (640). There are two night routes serving Wealdstone: 140 and N18.

The Harrow Leisure Centre is located in Wealdstone and facilities include swimming, badminton, snooker, martial arts and a gym run by Harper's Fitness. One of the country's oldest remaining skate parks, Harrow Skate Park, is next to the leisure centre. The park is a major centre of the British skateboarding scene and draws visitors from all over the country.

In 1903, Wealdstone FC played at the College Farm ground situated in Locket Road, then later played in Belmont Road before moving in 1922 to Lower Mead, which was located behind the Dominion/ABC cinema (now closed) on Station Road, prior to its controversial sale to Tesco for retail development in 1991. After many years of without a home stadium of their own, Wealdstone FC is now based nearby in Ruislip, having abandoned plans to relocate within the borough of Harrow at Prince Edward Fields, Canons Park, now the home stadium of Barnet FC. Former players include Stuart Pearce, Vinnie Jones and Jermaine Beckford.

All content from Kiddle encyclopedia articles (including the article images and facts) can be freely used under Attribution-ShareAlike license, unless stated otherwise. Cite this article:
Wealdstone Facts for Kids. Kiddle Encyclopedia.