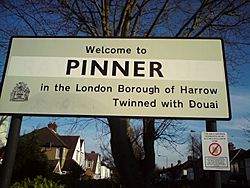 Pinner is a wealthy area of the London Borough of Harrow in northwest London, England. It is within the historical bounds of the county of Middlesex, 12.2 miles north west of Charing Cross.

Eastcote is sometimes referred to in its postal address as being part of Pinner, despite being in Hillingdon (Pinner being located within Harrow).

Pinner Village was originally a hamlet, first recorded in 1231 as Pinnora, although the already archaic -ora (meaning 'hill') suggests its origins lie no later than c.900. The name Pinn is shared with the River Pinn, which runs through the village.

The oldest part of the village lies around the fourteenth-century parish church of St. John the Baptist, at the junction of the present day Grange Gardens, The High Street and Church Lane. The earliest surviving private dwelling, East End Farm Cottage, dates from the late fifteenth-century.

The village expanded rapidly between 1923 and 1939 when a series of garden estates, including the architecturally significant Pinnerwood estate conservation area – encouraged by the Metropolitan Railway – grew around its historic core. It was largely from this time onwards that the area (including Hatch End, which forms the northeastern part of Pinner) assumed much of its present-day suburban character. The area is now continuous with neighbouring suburban districts including Rayners Lane and Eastcote.

Pinner contains a large number of homes built in the 1930s Art Deco style, the most grand of which is the Grade II listed Elm Park Court at the junction of West End Lane and Elm Park Road. Pinner has had an annual street fair held in May since 1336, when it was granted by Royal Charter by Edward III; it remains popular today.

Pinner tube station is on the Metropolitan line in zone 5.

Pinner is considered to be the wealthy side of the London Borough of Harrow, with wide tree-lined streets, large houses and flat conversions in attractive Edwardian buildings. Pinner also boasts the lowest crime rate of the whole of London, and the single-sex schools have a prestigious reputation, making it a popular area for affluent families.

Pinner is both a religiously and culturally diverse area, with the ethnic minority population having grown significantly since the 1970s. Pinner ward nonetheless has the highest concentration of people describing themselves as White in the London Borough of Harrow, at 62 per cent of the population in 2011. Pinner South ward has the next highest proportion of White people at 59.4 per cent. A local synagogue and various churches serve the religious needs of the local community.

Pinner's old parish church, St John the Baptist, Pinner is dedicated to John the Baptist. It was consecrated in 1321, but built on the site of an earlier Christian place of worship. The west tower and south porch date from the 15th century.

Pinner has a rugby union team, Pinner and Grammarians RFC, a member club of the Rugby Football Union it is the most junior team to have supplied a President to the RFU. It also has a Cricket team, Pinner Cricket Club.Pinner also has a youth football club, Pinner United FC – www.pinnerunitedfc.com. In addition to numerous restaurants and a number of public houses, Pinner also has a thriving amateur theatre group, Pinner Players, who have been performing in the area since 1936 and currently stage productions at Pinner Village Hall off Chapel Lane - www.pinnerplayers.com

Pinner features notably in John Betjeman's 1973 film Metro-Land, where it centres on the village fair in the High Street. The BBC sitcom May to December was set in Pinner, and its exterior shots were videotaped in the High Street. During the 1990s the children's TV series of Aquila was filmed in and around Pinner, particularly at the local Cannon Lane School. Chucklevision, the Children's TV series based on the Chuckle Brothers also filmed in Pinner. The film Nowhere Boy had a number of scenes filmed in Pinner, including outside the Queens Head Pub, Pinner High street, and on Woodhall Gate, which stood in for John Lennon's childhood home. Pinner has also been the setting for the BBC sitcom My Hero and the Channel 4 sitcom The Inbetweeners. Filming for the movie The Theory of Everything took place outside the St John the Baptist Church on Pinner High Street.

All content from Kiddle encyclopedia articles (including the article images and facts) can be freely used under Attribution-ShareAlike license, unless stated otherwise. Cite this article:
Pinner Facts for Kids. Kiddle Encyclopedia.