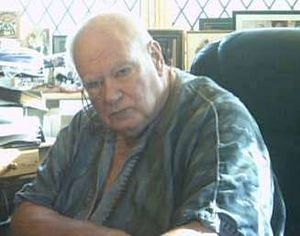 Sir Patrick Alfred Caldwell-Moore (4 March 1923 – 9 December 2012) was an English astronomer, researcher and television presenter. He is known for his books and his television series “The Sky at Night”. He became known as a specialist in Moon observation and for creating the Caldwell catalogue.

All content from Kiddle encyclopedia articles (including the article images and facts) can be freely used under Attribution-ShareAlike license, unless stated otherwise. Cite this article:
Patrick Moore Facts for Kids. Kiddle Encyclopedia.