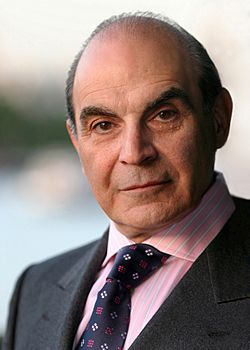 Sir David Suchet CBE (born 2 May 1946 in London) is an English actor. He mainly works on British television. He has been in many films over the years. He is perhaps best known for playing Hercule Poirot in the series Agatha Christie's Poirot. He has made a film version of almost all of the books by Agatha Christie.

He started his career in theatre. In 1974 he joined the famous Royal Shakespeare Company. In 2002 he was made an Officer of the Order of the British Empire and in 2010 he was made a Commander of the same order.

All content from Kiddle encyclopedia articles (including the article images and facts) can be freely used under Attribution-ShareAlike license, unless stated otherwise. Cite this article:
David Suchet Facts for Kids. Kiddle Encyclopedia.