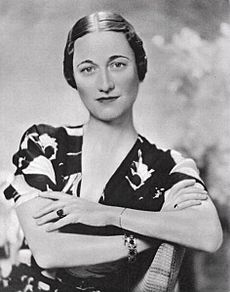 Wallis Simpson (born Bessie Wallis Warfield; 19 June 1896 - 24 April 1986), who later became the Duchess of Windsor, caused a serious crisis in the mid-1930s. The heir to the throne of the United Kingdom, Prince Edward, had fallen in love with her. However, she was married to another man, and she had already divorced her first husband to marry him. In 1936 she divorced her second husband.

On 20 January 1936 George V died and Edward became king. Edward and Mrs Simpson had already started an affair. After her divorce, he wanted to marry her.

The monarch is the head of the Church of England, and at the time the church was strongly against the idea of divorce. Their affair was regarded as sin.

In November, the King consulted with the British Prime Minister, Stanley Baldwin, on a way to marry Wallis and keep the throne. The King suggested a morganatic marriage, where he would remain king but Wallis would not be queen. This was rejected by Baldwin and the Prime Ministers of Australia and South Africa. If the King were to marry Wallis against Baldwin's advice, the Government would be required to resign, causing a constitutional crisis.

The King decided he had no option but to abdicate if he wished to marry Wallis. On 11 December 1936, Edward said in a radio broadcast, "I have found it impossible to carry the heavy burden of responsibility, and to discharge my duties as King as I would wish to do, without the help and support of the woman I love".

After the abdication the king became the Duke of Windsor, and Mrs Simpson became the Duchess of Windsor. While the Duke retained his style of "Royal Highness", the new King declared that the Duchess would not be allowed to do the same. She was instead styled Her Grace The Duchess of Windsor - the same style given to a non-Royal Duchess. The couple lived abroad, mainly in France, for most of their lives. During the war they moved out of France to Portugal and later to the Bahamas. They were widely suspected of having sympathy with the German Nazi party. The Duke himself wrote in the New York Daily News of 13 December 1966: "it was in Britain's interest and in Europe's too, that Germany be encouraged to strike east and smash Communism forever ... I thought the rest of us could be fence-sitters while the Nazis and the Reds slogged it out".

After the Duke's death from cancer in 1972, the Duchess travelled to the United Kingdom to attend his funeral. She stayed at Buckingham Palace during her visit. The Duchess of Windsor died on 24 April 1986 at her home in the Bois de Boulogne, Paris at the age of eighty-nine. She was buried alongside her husband in the Royal Burial Ground. She wrote about her life in 1956.

All content from Kiddle encyclopedia articles (including the article images and facts) can be freely used under Attribution-ShareAlike license, unless stated otherwise. Cite this article:
Wallis Simpson Facts for Kids. Kiddle Encyclopedia.