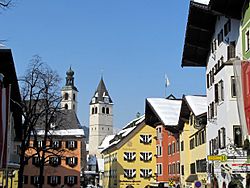 Kitzbühel is a small medieval town in Tyrol, Austria. It is the administrative center of the Kitzbühel district (Bezirk). About 8,000 people are living there (2016).

It is in the Kitzbühel Alps along the river Kitzbüheler Ache and about 100 km (62 mi) east of the state capital Innsbruck.

Kitzbühel is a ski resort of international renown and its ski season lasts from mid October to early May. During winter and early spring it is frequented primarily by upper-class clientele from Austria and from abroad.

All content from Kiddle encyclopedia articles (including the article images and facts) can be freely used under Attribution-ShareAlike license, unless stated otherwise. Cite this article:
Kitzbühel Facts for Kids. Kiddle Encyclopedia.