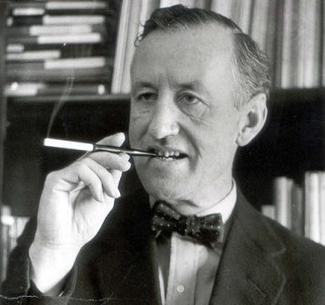 Ian Lancaster Fleming (28 May 1908 - 12 August 1964) was a British author and journalist. He was best known for writing the James Bond spy novels. He also wrote the children's book Chitty Chitty Bang Bang in 1964.

Fleming was born in London to a wealthy family. He was educated at Eton College. He spent many years working in Britain's Naval Intelligence Division during the Second World War. During this time, Fleming helped with the planning and management of two British intelligence units. This experience along with his work in journalism provided much of the background to the stories in his James Bond novels.

Fleming wrote his first James Bond novel, Casino Royale, in 1952. Because of the book's success, Fleming wrote eleven more novels and two collections of short-stories about the British secret agent.

In total, there have been twenty-three major movies based on Fleming's famous character. The twenty-fourth movie, Spectre, is scheduled to be released in late 2015.

Fleming died of a heart attack in Canterbury, Kent.

All content from Kiddle encyclopedia articles (including the article images and facts) can be freely used under Attribution-ShareAlike license, unless stated otherwise. Cite this article:
Ian Fleming Facts for Kids. Kiddle Encyclopedia.