Glenelg (Scottish Gaelic: Glinn Eilg, also Gleann Eilg) is a village and civil parish in the Lochalsh area of Highland in western Scotland. The parish covers a large area including Knoydart, North Morar and the ferry port of Mallaig. At the 2001 census it had a population of 1,507. The smaller "settlement zone" around the village had a population of 283. In 2011 Highland Council estimated that the community of Glenelg and Arnisdale had a population of 291.

Glenelg is located by the Kyle Rhea narrows, where the Isle of Skye is closest to the mainland. Between November and February, the only access to Glenelg is by road (the 339 metres (1,112 ft) Bealach (pass) Ratagain from Shiel Bridge on the main road from Inverness to Skye). Between March and October, there is the option to cross the Kyle Rhea strait by ferry (see below).

Its proximity to Skye meant that Glenelg was formerly of more strategic importance. Cattle reared on Skye were routinely made to swim the 534 metres to the mainland before being herded to market along the drovers' road to Kinlochhourn and on to the Scottish Lowlands.

Following the initial Jacobite risings, Glenelg was chosen as one of four sites in the Highlands for a military barracks. These were completed in 1725 and a military road soon linked Glenelg to the rest of General George Wade's road network. Ultimately unsuccessful in preventing the 1745 uprising and not needed after the Highland Clearances, the Bernera Barracks are now ruined.

A person from Glenelg is known in Gaelic as an Eilgeach.

Between March and October, a small vehicle ferry connects to Kylerhea on Skye across the powerful currents of the narrows. The ferry used on the crossing since 1982 is the MV Glenachulish, the last turntable ferry in operation. Built in 1969 for the Ballachulish crossing by the Ailsa Shipbuilding Company in Troon, it is now operated by a local Community Interest Company. The ferry can transport six cars plus foot passengers on the open deck. It is unusual in that the ferry ties up alongside the slipway and the crew manually turn the deck, which is built on a turntable, for cars and passengers to embark and disembark. When the Ballachulish Bridge opened in 1975, it became the relief vessel for Corran, Kylesku and Kessock near Inverness. 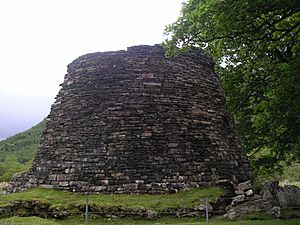 The ferry is a tourist attraction in itself. The former structure of the Sandaig lighthouse has now been erected on the slipway to serve as a souvenir shop. Another attraction in recent years are a pair of resident sea eagles During the summer, sightings are almost daily as they fish by the ferry crossing trying to feed their young. Glenelg attracts tourists to the remains of two of the best-preserved brochs (Dun Telve and Dun Troddan) on mainland Scotland. 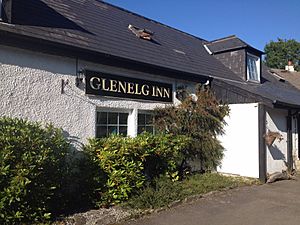 The village's only pub is the Glenelg Inn. There is also a village shop.

Glenelg Amateur Football Club is known to locals by their nickname of "The Duffers", were re-formed in 2011 by Grant MacLeod.

Although the name nowadays refers to the whole district, it is likely that it originally referred only to the glen containing the brochs. The specific element of the name (Eilg) is found elsewhere, such as in Elgin (Gaelic Eilginn) and is generally accepted as being a kenning for Ireland. Other such names include Banavie, Banff, Atholl, Lochearn, Auldearn, and show Gaelic settlers using the same migrant naming practice as gives us placenames such as New Caledonia and New York.

Glenelg was officially twinned with Glenelg, Mars on 20 October 2012. A palindromic name was chosen by NASA because the Curiosity rover would visit the site twice.

The author Gavin Maxwell's retreat (known as Camusfeàrna in his books) is about 6 miles (9.7 km) south west of Glenelg. The Sandaig Islands are a small group of islets just off the point in the Sound of Sleat.

All content from Kiddle encyclopedia articles (including the article images and facts) can be freely used under Attribution-ShareAlike license, unless stated otherwise. Cite this article:
Glenelg, Highland Facts for Kids. Kiddle Encyclopedia.