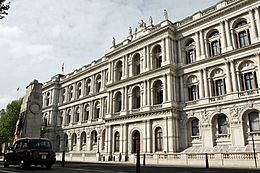 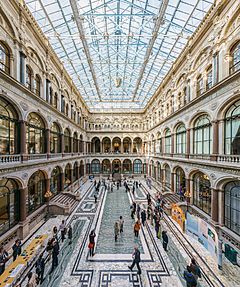 The Durbar Court at the former India Office, now part of the FCO

The Foreign Office is a department of the British Government. Its official name has changed from time to time, and at present it is the Foreign, Commonwealth & Development Office (FCDO). Its head is known as the Foreign Secretary, and this is one of the four top posts in the British Cabinet.

The Foreign Office is responsible for protecting and promoting British interests worldwide. It was formed in 1782. In its present form it was created in 1968 by merging the Foreign Office and the Commonwealth Office (to FCO). Later on it merged with the Department for International Development.

The Foreign Office provides staff for embassies and other diplomatic stations throughout the world. It trains staff in foreign languages. At one time (a century ago) its staff ruled over a third of the world. The overseas British Empire recovered after the loss of the Thirteen Colonies in 1776, and reached its peak about 1920. Foreign policy made sure it was never seriously threatened.

All content from Kiddle encyclopedia articles (including the article images and facts) can be freely used under Attribution-ShareAlike license, unless stated otherwise. Cite this article:
Foreign Office Facts for Kids. Kiddle Encyclopedia.