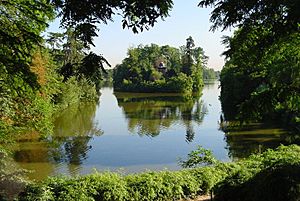 The lower lake in the Bois de Boulogne

The Bois de Boulogne is a large public park in the west of Paris. It was created between 1852 and 1858 during the reign of the Emperor Louis Napoleon. It is in the 16th arrondissement of Paris, near the suburb of Boulogne-Billancourt and Neuilly-sur-Seine.

The Bois is the second-largest park in Paris, a bit smaller than the Bois de Vincennes on the eastern side of the city. It covers an area of 8.46 square kilometres, which is 2.5 times larger than Central Park in New York, and comparable in size to Richmond Park in London.

Within the boundaries of the Bois de Boulogne are an English landscape garden with several lakes and a cascade; two smaller botanical and landscape gardens; a zoo and amusement park; a complex of greenhouses holding a hundred thousand plants; two tracks for horse racing; a tennis stadium where the French Open tournament is held each year; and other attractions. 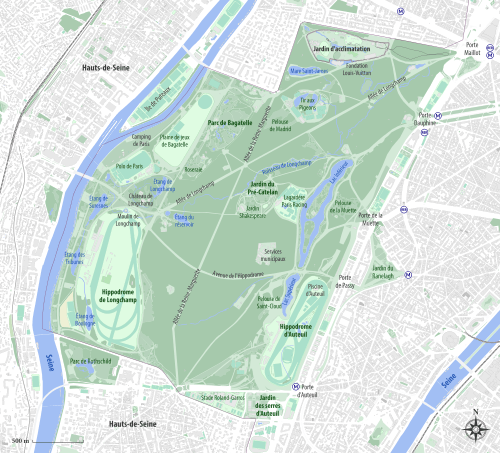 All content from Kiddle encyclopedia articles (including the article images and facts) can be freely used under Attribution-ShareAlike license, unless stated otherwise. Cite this article:
Bois de Boulogne Facts for Kids. Kiddle Encyclopedia.