Coronado lies on the geographic combination of an island and a tombolo connected to the mainland called the Silver Strand. Coronado is a tied island, connected by a tombolo. In 2012, Dr. Stephen Leatherman, Director of the Laboratory for Coastal Research, ranked Coronado Beach as the best beach in the United States.

Coronado is Spanish for "crowned one", and thus it is nicknamed The Crown City. Three ships of the United States Navy have been named after the city, including the USS Coronado (LCS-4).

Coronado was incorporated as a town on December 11, 1890. The land was purchased by Elisha Spurr Babcock, along with Hampton L. Story, and Jacob Gruendike. Their intention was to create a resort community, and in 1886, the Coronado Beach Company was organized. By 1888, they had built the Hotel del Coronado, and the city became a major resort destination. They also built a schoolhouse, and formed athletic, boating, and baseball clubs.

In 1900, a tourist/vacation area just south of the Hotel del Coronado was established by John D. Spreckels and named Tent City. Over the years the tents gave way to cottages, the last of which was torn down in late 1940 or early 1941.

In the 1910s, Coronado was connected to San Diego by the Class 1 streetcars and an extensive, accompanying San Diego public transit system that was spurred by the Panama–California Exposition of 1915 and built by John D. Spreckels. These streetcars became a fixture of the city until their retirement in 1939. 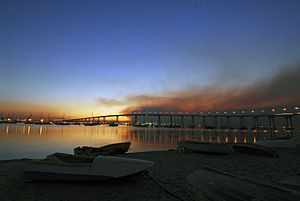 Geographically, Cornado is not an "island". It is a tied island, connected to the mainland by a strip of land called the Silver Strand. This tombolo, along with Coronado and North Island, forms San Diego Bay. Originally, Coronado was mostly separated from North Island by a shallow inlet of water called the Spanish Bight, but just like Coronado, North Island was never completely surrounded by water. The development of North Island by the United States Navy prior to and during World War II led to the filling of the bight by July 1944, combining the land areas into a single body. The Navy still operates Naval Air Station North Island (NASNI or "North Island") on Coronado. On the southern side of the town is Naval Amphibious Base Coronado, a training center for Navy SEALs and Special warfare combatant-craft crewmen (SWCC). Both facilities are part of the larger Naval Base Coronado complex. Though there has been localized development of the coastline, including some minor landfill, Coronado retains largely the same area that it had in 1857.

On New Year's Day 1937, during the Great Depression, the gambling ship SS Monte Carlo, known for "drinks, dice, and dolls", was shipwrecked on the beach about a quarter mile south of the Hotel del Coronado.

In 1969, the San Diego–Coronado Bridge was opened, allowing much faster transit between the cities than bay ferries or driving via State Route 75 along the Silver Strand. The city is currently weighing the options of additional construction on Highway 75 to alleviate congestion as traffic flows to and from San Diego and North Island.

According to the Köppen climate classification system, Coronado has a semi-arid climate, abbreviated "BSk" on climate maps. 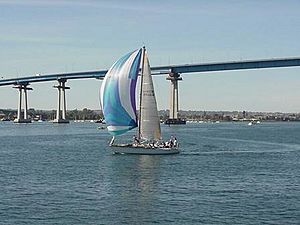 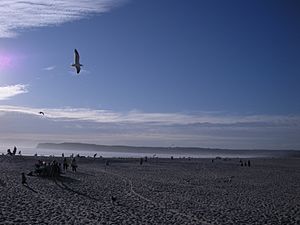 Main page: Race and ethnicity in the United States Census

There were 7,734 households out of which 27.0% had children under the age of 18 living with them, 54.0% were married couples living together, 7.4% had a female householder with no husband present, and 36.2% were non-families. 30.9% of all households were made up of individuals and 13.3% had someone living alone who was 65 years of age or older. The average household size was 2.27 and the average family size was 2.84.

Real estate in the city of Coronado is very expensive. According to a recent county-wide zip code chart published in The San Diego Union-Tribune in August 2006, the median cost of a single-family home within the city's zip code of 92118 was $1,605,000. In 2010, Forbes.com found that the median home price in Coronado had risen to $1,840,665. 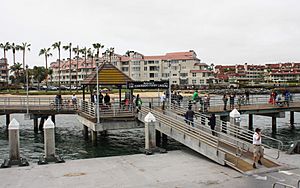 Tourism is an essential component of Coronado's economy. This city is home to three major resorts (Hotel del Coronado, Coronado Island Marriott and Loews Coronado Bay Resort) as well as several other hotels and inns. The downtown district along Orange Avenue with its many shops, restaurants and theaters is also a key part of the local economy. Many of the restaurants are highly rated and provide a wide variety of cuisine choices.

In 2008, the Travel Channel rated Coronado Beach as the fifth best beach in America.

All content from Kiddle encyclopedia articles (including the article images and facts) can be freely used under Attribution-ShareAlike license, unless stated otherwise. Cite this article:
Coronado, California Facts for Kids. Kiddle Encyclopedia.