The city of San Diego was originally focused in Old Town near the Presidio, several miles north of current Downtown. The location was not ideal because it was several miles from navigable water. In 1849 Lt. Andrew B. Gray, a surveyor working with the boundary commission to establish the boundaries of the new state of California, suggested that an area closer to San Diego Bay would be a better location for a city because it would be better for trade. He proposed the idea to William Heath Davis, who recruited four other investors. The partners under Davis's leadership purchased 160 acres (65 ha) of land in what is now Downtown San Diego. They laid out a street plan for New Town and built a wharf and warehouse. Several people built houses there, including the still-standing William Heath Davis House, now a museum. John Judson Ames wrote a prospectus for a newspaper, the San Diego Herald in December 1850, soliciting advertisements and subscriptions from the towns-people; the first issue was published on May 29, 1851. However, New Town did not do well due to a lack of fresh water, a financial depression in 1851, and opposition from the established settlements in Old Town and La Playa. 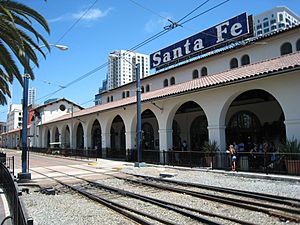 In 1867, Alonzo Horton purchased 800 acres (320 ha) of pueblo lands in the current Downtown area, and in 1869 he added Davis’s 160 acres (65 ha) to his holdings; the area was referred to as the Horton Addition. Davis’s wharf had fallen to pieces by then, but Horton realized the area was still ideal for a harbor. He built a new wharf at the end of Fifth Avenue in 1869. He vigorously sold property and gave away land to promote development of the area, fueling the first of San Diego’s many real estate speculation booms. People flocked to the area, known as New Town, because of its better access to shipping. In 1871 government records were moved to a new county courthouse in New Town. By the 1880s New Town had totally eclipsed Old Town (as it is called to this day) as the heart of the growing city. 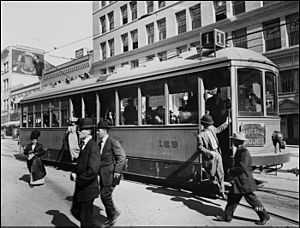 A Class 1 streetcar at 5th and Broadway in downtown San Diego, circa 1915

In 1885 the transcontinental railroad reached San Diego. The Santa Fe railway station opened downtown in 1887 (that station was replaced in 1915 by the Downtown landmark Santa Fe Depot, which is still in use). In 1886 the city’s first electric lights and first streetcars were established in New Town. In 1912 the Spreckels Theater opened downtown, the first modern commercial playhouse west of the Mississippi. A new commercial pier, the Broadway Pier, was built by the city in 1913.

In the 1910s, Downtown became one of the many San Diego neighborhoods connected by the Class 1 streetcars and an extensive San Diego public transit system that was spurred by the Panama-California Exposition of 1915 and built by John D. Spreckels. These streetcars became a fixture of the neighborhood until their retirement in 1939.

In 1964 the multi-story City Hall and Community Concourse were dedicated on a four-block-square property at 202 C Street. Recent mayors and city councils have discussed building a replacement city hall, but no replacement plan has been approved. 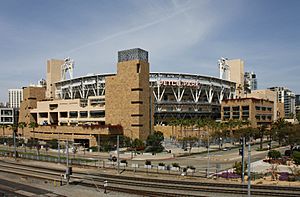 In the 1960s, Centre City began to fall into a state of disrepair and disrepute. Major businesses and stores moved from downtown to suburban shopping malls. Downtown became known as a hangout for homeless people and sailors on liberty. Tattoo parlors, bars, and clubs were predominant forms of business. Trash littered the Gaslamp Quarter, many 19th century Victorian houses were rundown, and there were few buildings of significant size (the tallest building at the time was fourteen stories, the locally famous El Cortez). Despite this, low- and mid-rise buildings were beginning construction. 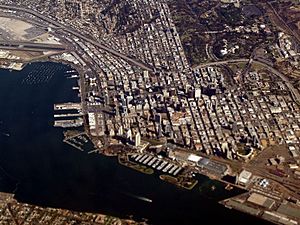 Located in Central San Diego, Downtown San Diego is delimited by San Diego Bay to the west and southwest, Bankers Hill, Middletown, and Balboa Park to the north, Sherman Heights and Golden Hill to the east, and Barrio Logan and Logan Heights to the southeast. San Diego International Airport is just northwest of downtown.

Due to San Diego International Airport's (Lindbergh Field) proximity to downtown, there is a FAA imposed 500-foot height restriction on all buildings within a 1.5 mile radius of the runway. The height regulation exists because when planes approach the airport, any structure taller than 500 ft. within the radius could interfere with flight operations and potentially result in a collision.

The United States Postal Service operates the downtown San Diego Post Office at 815 E Street. The city's former main public library is located across the street from it at 8th and E streets, but currently is vacant. A new nine-story Central Library opened in 2013 on Park Boulevard at J Street. Other government buildings downtown include City Hall and other city administration buildings, the San Diego Police Headquarters at 14th and Broadway, the State of California office building at 1350 Front Street, and a three-block federal office complex at 8th and Front streets. County and federal courthouses are also located downtown.

The Downtown area contains numerous sites that are listed on the National Register of Historic Places. They include: 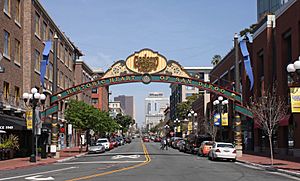 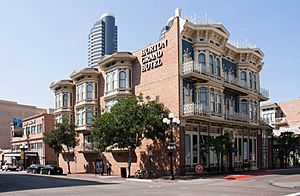 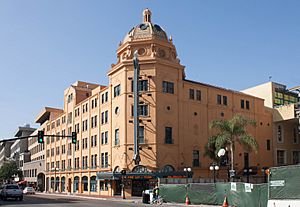 The Civic Theatre in the Community Concourse is the home of the San Diego Opera as well as traveling shows. The San Diego Symphony is headquartered at Copley Symphony Hall, a renovated movie palace on 7th Avenue originally built in 1929 as the Fox Theater. The Spreckels Theater at 1st and Broadway, in continuous operation since 1912, hosts local and traveling performances and productions. The Balboa Theatre, built in 1924, re-opened in 2008 after extensive renovations as a venue for live performances and concerts. Both the Spreckels and the Balboa theaters are listed on the National Register of Historic Places. Other downtown theaters include the Lyceum in Horton Plaza, which hosts the San Diego Repertory Theatre as well as concerts and art shows, and the Sledgehammer Theater. Nightclubs such as the House of Blues and Croce’s feature well-known musical groups. The Museum of Contemporary Art, also located in downtown San Diego, has displayed work across a collection of media since 1950.

The Columbia (waterfront) neighborhood of downtown hosts the Midway aircraft carrier museum ship, as well as the eight ships and boats of the San Diego Maritime Museum, headlined by the Star of India.

Downtown events include the Big Bay Balloon Parade, held in conjunction with the Holiday Bowl; the Martin Luther King Jr. Day Parade and Festival; the Parade of Lights featuring holiday-decorated boats on the Bay; and the San Diego Street Scene music festival.

All content from Kiddle encyclopedia articles (including the article images and facts) can be freely used under Attribution-ShareAlike license, unless stated otherwise. Cite this article:
Downtown San Diego Facts for Kids. Kiddle Encyclopedia.