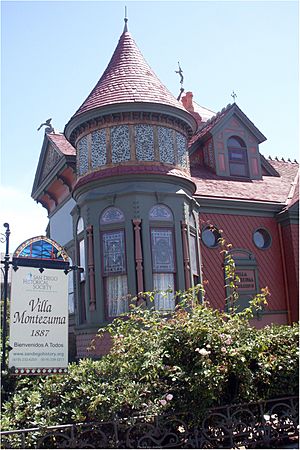 Sherman Heights is a neighborhood in San Diego bordered by Golden Hill to the north, Grant Hill to the east, East Village to the west, and Logan Heights to the south.

The Sherman Heights neighborhood has the following roadways as boundaries: Martin Luther King Jr. Freeway to the north, 25th Street to the east, Imperial Avenue to the south, and Interstate 5 to the west.

Sherman Heights takes its name from its original developer Matthew Sherman, who purchased the land just east of Downtown San Diego in 1867. The Villa Montezuma, a large Victorian home built for musician and spiritualist Jesse Shepard in 1887, has been operated as a house museum, and is owned by the city of San Diego.

Sherman Heights has been the site of succeeding waves of immigrants to San Diego, beginning with Germans in the 1920s, Japanese through the 1940s, Africans through the 1970s, and Mexicans throughout the history of the city. The neighborhood has been designated a historic district by the City of San Diego. SM27

The Sherman Heights Community Center is located at 2258 Island Avenue, San Diego, CA 92102. The building opened in 1994 and has regular community meetings, classes, and other events. For information on upcoming events and contact information see the Center's website at: http://historicbarriodistrict.org/

All content from Kiddle encyclopedia articles (including the article images and facts) can be freely used under Attribution-ShareAlike license, unless stated otherwise. Cite this article:
Sherman Heights, San Diego Facts for Kids. Kiddle Encyclopedia.