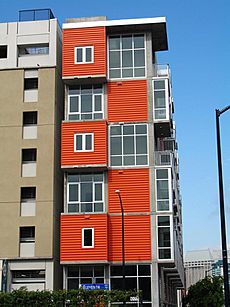 East Village is a neighborhood in San Diego, California, United States. It is the largest urban neighborhood in downtown San Diego. It is located east of the Gaslamp Quarter and southeast of the Core district and Cortez Hill in downtown San Diego. East Village encompasses 130 blocks between Seventh Avenue east to 18th Street. The thriving urban enclave is home to more than 700 businesses including restaurants, hotels, and art galleries.

San Diego's East Village was traditionally a series of warehouses and vacant lots. It wasn't until the 1990s that it became a community for artists and social services. Residential aspects of the East Village became a reality in 2005, after Petco Park was established in 2004.

The East Village community now has a population of 10,000 (and growing), with most residents living in mid-rise or luxury condominiums and lofts. Continuing urban development and the steady growth of new businesses draws locals from neighboring downtown areas. 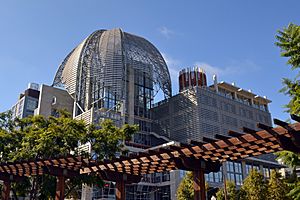 Beginning with redevelopment, and particularly after the opening of Petco Park in 2004, the area became known for upscale restaurants and trendy shops, although it is still rife with homeless. The neighborhood is now a hub of construction including condominium projects and other public spaces, including the recently completed Central Library. The $185 million project, designed by architect Rob Quigley, officially opened September 30, 2013.

All content from Kiddle encyclopedia articles (including the article images and facts) can be freely used under Attribution-ShareAlike license, unless stated otherwise. Cite this article:
East Village, San Diego Facts for Kids. Kiddle Encyclopedia.