The Marina district is a neighborhood in the southwest section of Downtown San Diego, California, U.S. 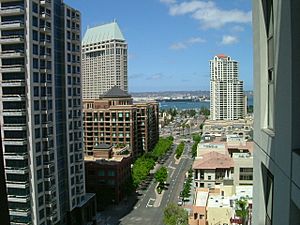 View of west end of Market St., viewed from the 14th floor of Renaissance condominiums, which is located at First and Market.

This district used to be full of warehouses and vacant lots, but now it houses mid-rise and high-rise hotels, apartments, condominiums, medical offices and retail. Seaport Village and the San Diego Convention Center are located in this neighborhood. Pantoja Park, the oldest park in San Diego, is located in the Marina District.

All content from Kiddle encyclopedia articles (including the article images and facts) can be freely used under Attribution-ShareAlike license, unless stated otherwise. Cite this article:
Marina, San Diego Facts for Kids. Kiddle Encyclopedia.