Little Italy is a neighborhood in Downtown San Diego, California, that was originally a predominately Italian and Portuguese fishing neighborhood. It has since been gentrified and is now a popular neighborhood full of Italian restaurants and grocery stores, home design stores, art galleries and residential units.

Little Italy is one of the more active downtown neighborhoods, with frequent festivals and events including a weekly farmers market, also known as the Mercato (the Market, in Italian). The neighborhood has low crime rates when compared with other neighborhoods in Downtown San Diego and is maintained by the Little Italy Neighborhood Association, which looks after trash collection, decorations, and special events.

Little Italy is located in the northwest end of Downtown, just a few blocks away from the Embarcadero. It is located north of Columbia, south of Middletown, southeast of Core, and west of Cortez Hill. It is also located on a hill thus giving its hilly terrain.

From the 19th century through the 1970s, people from Italy led the enterprise in the building the boats to found the American tuna fishing fleet and canning industry based in San Diego, the "tuna capital" of the Western US. The first large tuna cannery, the Pacific Tuna Canning Company, was founded in 1911. By the mid-1930s the canneries employed more than 1,000 people. Due to rising costs and foreign competition the last of the canneries closed in the early 1980s. A large fishing fleet supported the canneries, mostly staffed by immigrant fishermen from the Portuguese Azores and Italy, whose influence is still felt in neighborhoods like Little Italy and Point Loma.

Following the 1906 San Francisco earthquake and fire, other families then moved to live at the San Diego "Little Italy" fishing colony from the Italian Riviera and from Sicily. In the 1970s, the interstate freeway construction split the neighborhood. There is a sculpture dedicated to the cannery workers in Barrio Logan and a "Tunaman's Memorial" statue on Shelter Island. 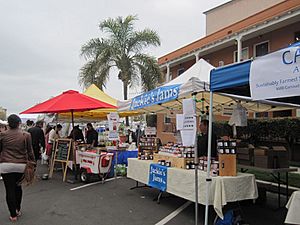 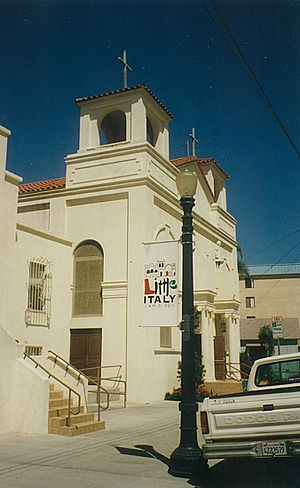 Our Lady of the Rosary Church, Barnabites fathers

There are multiple public improvements and high-rise and mid-rise buildings under construction or approved and scheduled for construction. The northern part of Little Italy is less densely populated than the southern part of Little Italy, which is mainly made up of high-rise and mid-rise buildings. Some older buildings have been renovated for new uses; newer buildings aim to duplicate the feel of the original establishments. The main street, India Street, features public art and plazas, street trees, galleries and antique stores, and numerous restaurants with outside eating areas.

The Italian Community Center of San Diego, a 500-member non-profit organization founded in 1981 for people interested in Italian culture and language, is located in this neighborhood. This foundation is focused on maintaining the original feeling of Italy.

The Convivio Center & Little Italy Heritage Museum is Little Italy's newest destination for arts, culture, heritage and all things Italian in San Diego. The Center serves as a community resource and provides programs and events and something for everyone. 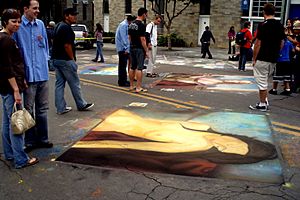 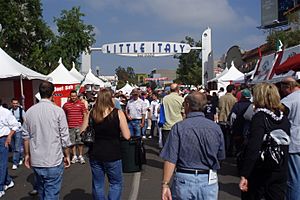 The majority of events held are related to Italian culture. Most of the events center on and around India street, usually bordered by Grape street to north and Beech Street or Ash Street to the south.

The Saturday before Mardi Gras, there is the Little Italy Carnevale, a Venetian mask event with several vignettes of entertainment and an open house for retail shops and restaurants.

In April, there is ArtWalk, the largest art event in the west coast with over 120,000 people coming to purchase various mediums of art - paintings, photography, jewelry, furniture and more. Also in April, there is Gran Fondo (Big Ride) Colnago San Diego, where over 3,000 bicycle riders from all over the world come to ride throughout "America's Finest City" in a 32, 53 or 100 mile ride that starts under the Little Italy landmark sign.

In May, the Sicilian American community of San Diego celebrates the Sicilian Festival, the first Italian festival held in Little Italy, launched in 1993. It features Italian and Sicilian entertainment, a cultural pavilion highlighting the contributions of the Italians of San Diego, vendors, and Sicilian cuisine.

In May and again in November, there is the Taste of Little Italy (Spring), where attendees pay to sample food from over 20 participating restaurants and entertainment throughout the community. Proceeds from this event go to the Little Italy Association.

In September, there is the Labor Day Stickball Tournament, where several stickball leagues come to play on the streets of Little Italy. This time honored east coast game is played like baseball, but with some minor tweaks. Every third year the San Diego leagues host a West Coast Invitational where they invite New York and Puerto Rico to play on the streets of San Diego's Little Italy.

In October, there is the Little Italy Festa, the largest Italian festival outside of New York City, with over 150 Italian food and crafter booths, three stages of entertainment, the Gesso Italiano Street Painting Festival, a stickball exhibition game, bocce ball tournament and beer & wine gardens. Also in October, there is the Bulls of St. Agata Charge Little Italy; this event showcases over 50 Lamborghinis from all over the United States.

In December, there is the Little Italy Christmas Village and Tree Lighting. This event has progressively gotten larger and larger, with Santa Claus riding in on Little Italy Fire Engine #3 kicking off the festivities of music, shopping and bubbly snow flakes for the kids. The neighborhood also showcases a life-sized gingerbread house all month long at Queenstown Public House (New Zealand inspired restaurant), which collects toy donations for local charities around the area each year

All content from Kiddle encyclopedia articles (including the article images and facts) can be freely used under Attribution-ShareAlike license, unless stated otherwise. Cite this article:
Little Italy, San Diego Facts for Kids. Kiddle Encyclopedia.