John Sidney "Slew" McCain Sr. (August 9, 1884 – September 6, 1945) was a U.S. Navy admiral. He held several command assignments during the Pacific campaign of World War II. McCain was a pioneer of aircraft carrier operations. Serving in the Pacific Ocean theater of World War II, in 1942 he commanded all land-based air operations in support of the Guadalcanal campaign, and in 1944-45 he aggressively led the Fast Carrier Task Force.

His operations off the Philippines and Okinawa and air strikes against Formosa and the Japanese home islands caused tremendous destruction of Japanese naval and air forces in the closing period of the war. He died four days after the formal Japanese surrender ceremony. 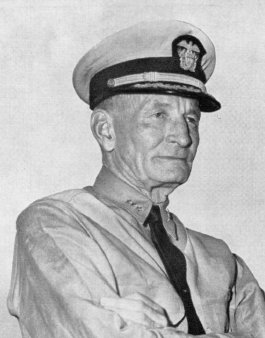 He attended the University of Mississippi for two years, where he joined the Phi Delta Theta Fraternity, and then decided to attend the United States Military Academy at West Point, where his brother William Alexander McCain was enrolled. To practice for its entrance exams, he decided to take the ones for the United States Naval Academy; when he passed those and earned an appointment, he decided to attend there instead. In doing so, he would leave behind his Mississippi plantation and adopt the Navy's itinerant life.

At the Naval Academy he failed his annual physical on account of defective hearing, but the condition was waived due to the great need for officers. When he graduated in 1906, he ranked 79th out of 116 in his class.

McCain, Sr. was married to Catherine Davey Vaulx at Colorado Springs, Colorado from 1909 until his death in 1945. They had one child. 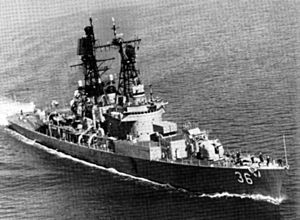 McCain died on September 6, 1945 in Coronado, California from a heart attack, aged 61. His death was front-page news. McCain was buried at Arlington National Cemetery.

McCain Field, the operations center at Naval Air Station Meridian, Mississippi, was named in his honor.

All content from Kiddle encyclopedia articles (including the article images and facts) can be freely used under Attribution-ShareAlike license, unless stated otherwise. Cite this article:
John S. McCain, Sr. Facts for Kids. Kiddle Encyclopedia.