Carroll County is a county in the U.S. state of Mississippi. As of the 2010 census, the population was 10,597. Its county seats are Carrollton and Vaiden. The county is named for Charles Carroll of Carrollton, the last surviving signatory of the Declaration of Independence.

Carroll County is part of the Greenwood, Micropolitan Statistical Area. Bordered by the Yazoo River on the west and the Big Black River to the east, it is considered within the Mississippi Delta region. Most of its land is in the hill country.

The Porter Wagoner song "The Carroll County Accident" was set here. The county is referred to in the third verse of Bobbie Gentry's 1967 hit song, "Ode to Billie Joe".

This area was developed by European Americans for cotton plantations near the rivers. After the American Civil War, many freedmen worked as sharecroppers or tenant farmers on the plantations. Other areas were used for timber. In 1890 the state legislature disenfranchised most blacks, who were a majority in the state, by creating barriers to voter registration; it also passed Jim Crow laws, treating freedmen and their descendants as second-class citizens. 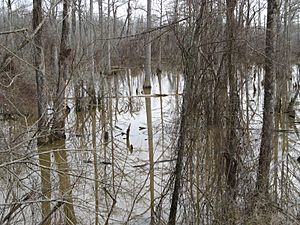 Swamp in Carroll County in winter

From 1940 to 1970, the county population declined markedly, as many African Americans left in the Great Migration to West Coast cities that had a growing defense industry. Others went North to Chicago and other industrial cities. Rural whites also moved to cities to find work.

Carroll Academy is an area private school that is financially supported by the Council of Conservative Citizens, a white supremacist group.

Pillow Academy in unincorporated Leflore County, near Greenwood, enrolls some students from Carroll County. It originally was a segregation academy.

All content from Kiddle encyclopedia articles (including the article images and facts) can be freely used under Attribution-ShareAlike license, unless stated otherwise. Cite this article:
Carroll County, Mississippi Facts for Kids. Kiddle Encyclopedia.