She was referred to as "a blond, blue-eyed Latin" and "the girl with the most beautiful face in Hollywood" in the 1920s. She retired from acting in 1936. Page returned to acting sixty years later in 1996, and appeared in four films in the 2000s.

Anita Evelyn Pomares was born on August 4, 1910 in Flushing, Queens, New York. Her parents were Marino Leo, Sr, who was originally from Brooklyn, and Maude Evelyn (née Mullane) Pomares. She had one brother, Marino Jr, who later worked for her as a gym instructor while her mother worked as her secretary and her father as her chauffeur. Page's paternal grandfather Marino was from Spain, and had worked as a consul in El Salvador. Her grandmother Anna Muñoz was of Castilian Spanish and French descent. 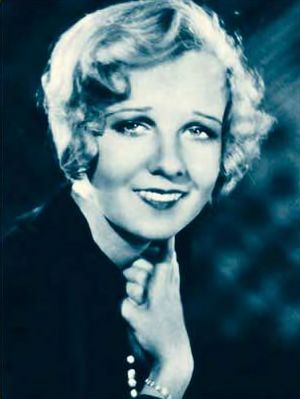 Publicity photo of Anita Page from Stars of the Photoplay

Page entered films with the help of friend, actress Betty Bronson. A photo of Page was spotted by a man who handled Bronson's fan mail who was also interested in representing actors. With the encouragement of her mother, Page telephoned the man who arranged a meeting for her with a casting director at Paramount Studios. After doing a screen test for Paramount, she became among the first residents of the Chateau Marmont. Page was offered contracts by both studios and selected MGM, "because they were so good for female actresses. If you ask me, MGM was the studio."

Page's first film for MGM was the 1928 comedy-drama Telling the World, opposite William Haines. Her performance in her second MGM film, Our Dancing Daughters (1928) opposite Joan Crawford was a success and it inspired two similar films in which they also co-starred, Our Modern Maidens and Our Blushing Brides. "I used to say that we're going to be 'The Galloping Grandmothers' at the rate we're going with these pictures," she reminisced in 1993.

The Broadway Melody (1929) opposite Bessie Love is considered among her most successful films, and it won Best Picture at the Academy Awards. Page transitioned to talking pictures, but she criticised the total loss of silent films. "In my opinion, silents were much better than talkies. One thing you had was mood music, which you could have playing throughout your scene to inspire you. My favorite song was 'My Heart at Thy Sweet Voice' from Samson and Delilah. I never seemed to tire of it. The trouble with talkies was, they let you have the music, but they'd stop it when you had to talk and it was always a let down for me."

When not working on films, she was busy with studio photographer George Hurrell creating publicity shots. She was one of his first subjects, and her photograph was his first to be published. MGM played up her heritage in these press releases such as this 1932 blurb: "She is that rarest and most interesting type of beauty,” ... “A Spanish blonde", and dubbed her "a blonde, blue-eyed Latin".

She was the leading lady to Lon Chaney, Buster Keaton, Robert Montgomery, Clark Gable and others. During the early 1930s, she was one of Hollywood's busiest actresses. She was involved romantically with Gable briefly during that time. At the height of her popularity, she was receiving more fan mail than any other female star, with the exception of Greta Garbo, and received several marriage proposals from Benito Mussolini in the mail.

When her contract expired in 1933, she announced her retirement from acting at the age of 23. She retired as she was denied a pay rise. She made one more movie, Hitch Hike to Heaven, in 1936, and then retired fully from acting. Later, Page claimed that Irving Thalberg had offered her the starring role in three movies if she would sleep with him, which she refused.

She married composer Nacio Herb Brown in 1934. The marriage was annulled a year later because Brown's previous divorce had not been finalized at the time they were married. She married Navy pilot Lieutenant Hershel A. House on January 9, 1937, in Yuma, Arizona. They moved to Coronado, California, and lived there until his death in 1991. They had two daughters, Linda and Sandra.

Page was a Democrat who supported the campaign of Adlai Stevenson during the 1952 presidential election. Page was a Roman Catholic.

Page returned to acting in 1996 after sixty years retirement and appeared in several low budget horror films. Film veteran Margaret O'Brien appeared in two of them.

Page was the last living attendee of the first Academy Awards ceremony in 1929, and frequently gave interviews as the "last star of the silents", appearing in documentaries about the era.

Page died in her sleep at the age of 98 on September 6, 2008, at her Los Angeles home, where she had lived with long time companion Randal Malone. She is buried in the Holy Cross Cemetery in San Diego.

For her contribution to the motion picture industry, Anita Page has a star on the Hollywood Walk of Fame at 6116 Hollywood Boulevard.

All content from Kiddle encyclopedia articles (including the article images and facts) can be freely used under Attribution-ShareAlike license, unless stated otherwise. Cite this article:
Anita Page Facts for Kids. Kiddle Encyclopedia.