Incumbent President Harry S. Truman was eligible to run again because the newly passed amendment did not matter who was president at that time. Truman chose not not run so the Democratic Party elected Adlai Stevenson.

Eisenhower was 62 when he won the election. This was the last time an older candidate was elected since James Buchanan was elected in 1856 at 65 until Ronald Reagan surpassed his age at 69 in the 1980 election.

Barkley was 74 years old and not accepted by labor union leaders because of his age.

Truman's running mate was going to be Senator Estes Kefauver, but he did not choose to run in the election. Truman's presidential disapproval rating was 66% at the end of his presidential term until decades later by Richard Nixon and later surpassed by George W. Bush. 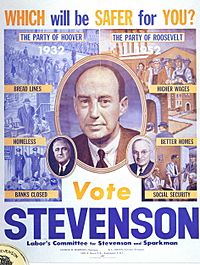 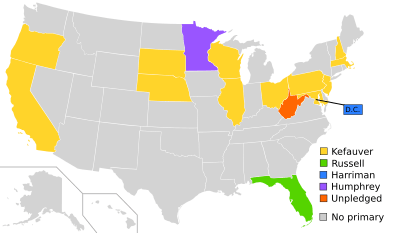 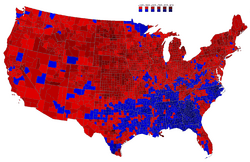 Results by country. Shade of red is for Eisenhower (Republican). Shade of blue is for Stevenson (Democratic)

Election results in these states were less than or ten percentage points. Colors represent the winning party, using the present-day convention in which red indicates Republican and blue indicates Democrat.

All content from Kiddle encyclopedia articles (including the article images and facts) can be freely used under Attribution-ShareAlike license, unless stated otherwise. Cite this article:
United States presidential election, 1952 Facts for Kids. Kiddle Encyclopedia.