Margaret O'Brien (born Angela Maxine O'Brien; January 15, 1937) is an American film, radio, television, and stage actress. Beginning a prolific career as a child actress in feature films for Metro-Goldwyn-Mayer at the age of four, O'Brien became one of the most popular child stars in cinema history and was honored with a Juvenile Academy Award as the outstanding child actress of 1944. In her later career, she appeared on television, on stage, and in supporting film roles.

Margaret O'Brien was born Angela Maxine O'Brien; her name was later changed following the success of the film Journey for Margaret (1942), in which she played the title role. Her father, Lawrence O'Brien, a circus performer, died before she was born. O'Brien's mother, Gladys Flores, was a well-known flamenco dancer who often performed with her sister Marissa, also a dancer. O'Brien is of half-Irish and half-Spanish ancestry. She was raised Catholic. 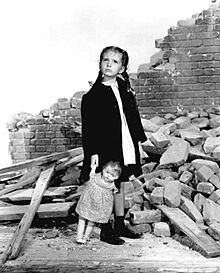 Margaret O'Brien in Journey for Margaret (1942) 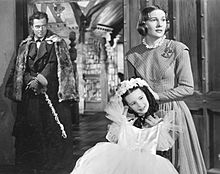 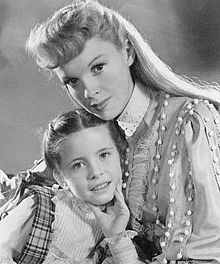 Margaret O'Brien and Judy Garland in Meet Me in St. Louis (1944)

O'Brien made her first film appearance in Metro-Goldwyn-Mayer's Babes on Broadway (1941) at the age of four, but it was the following year that her first major role brought her widespread attention. As a five-year-old in Journey for Margaret (1942), O'Brien won wide praise for her convincing acting style. By 1943, she was considered a big enough star to have a cameo appearance in the all-star military show finale of Thousands Cheer. Also In 1943, at the age of seven, Margaret co-starred in, "You, John Jones," a "War Bond/Effort," short film, with James Cagney and Ann Sothern, (playing their daughter), in which she dramatically recited President Lincoln's "Gettysburg Address." She played Adèle, a young French girl, and spoke and sang all her dialogue with a French accent in Jane Eyre (1943).

Arguably her most memorable role was as "Tootie" in Meet Me in St. Louis (1944), opposite Judy Garland. As she told the true story on a Turner Classic Movie special, Margaret was known as one of "the Best Cryers" on the MGM lot, but she was having a tough time crying, so to get Margaret to cry during a crucial emotional scene in the movie, her mother told her that "June Allyson, (another one of MGM's Best Cryers), is a better cryer than you!!" No surprise, she cried, and was wonderful in the role of "Tootie."

O'Brien had by this time added singing and dancing to her achievements and was rewarded with an Academy Juvenile Award the following year as the "outstanding child actress of 1944." Her other successes included The Canterville Ghost (1944), Our Vines Have Tender Grapes (1945), Bad Bascomb (1946) with Wallace Beery, and the first sound version of The Secret Garden (1949). She played Beth in the 1949 MGM release of Little Women, but she was unable to make the transition to adult roles.

O'Brien later shed her child star image in 1958 by appearing on the cover of Life magazine with the caption "The Girl's Grown", and was a mystery guest on the TV panel show What's My Line?. O'Brien's acting appearances as an adult have been sporadic, mostly in small independent films and occasional television roles. She has also given interviews, mostly for the Turner Classic Movies cable network.

O'Brien gave television credit for helping her to change her public image. 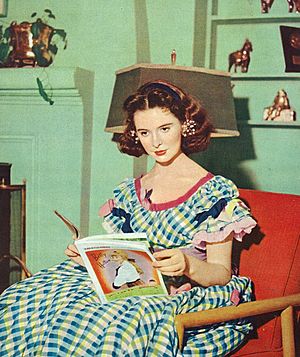 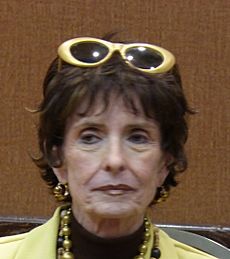 While O'Brien was growing up, her awards were always kept in a special room. One day in 1954, the family's maid asked to take O'Brien's Juvenile Oscar and two other awards home with her to polish, as she had done in the past. After three days, the maid failed to return to work, prompting O'Brien's mother to discharge her, requesting that the awards be returned. Not long after, O'Brien's mother, who had been sick with a heart condition, suffered a relapse and died. In mourning, 17-year-old O'Brien forgot about the maid and the Oscar until several months later when she tried to contact her, only to find that the maid had moved and had left no forwarding address.

Several years later, upon learning that the original had been stolen, the Academy promptly supplied O'Brien with a replacement Oscar, but O'Brien still held on to hope that she might one day recover her original Award. In the years that followed, O'Brien attended memorabilia shows and searched antique shops, hoping she might find the original statuette, until one day in 1995 when Bruce Davis, then executive director of the Academy, was alerted that a miniature statuette bearing O'Brien's name had surfaced in a catalogue for an upcoming memorabilia auction. Davis contacted a mutual friend of his and O'Brien's, who in turn phoned O'Brien to tell her the long-lost Oscar had been found.

Memorabilia collectors Steve Neimand and Mark Nash were attending a flea market in 1995 when Neimand spotted a small Oscar with Margaret O'Brien's name inscribed upon it. The two men decided to split the $500 asking price hoping to resell it at a profit and lent it to a photographer to shoot for an upcoming auction catalogue. This led to Bruce Davis' discovery that the statuette had resurfaced and, upon learning of the award's history, Nash and Neimand agreed to return the Oscar to O'Brien. On February 7, 1995, nearly 50 years after she had first received it, the Academy held a special ceremony in Beverly Hills to return the stolen award to O’Brien. Upon being reunited with her Juvenile Oscar, Margaret O'Brien spoke to the attending journalists:

For all those people who have lost or misplaced something that was dear to them, as I have, never give up the dream of searching—never let go of the hope that you’ll find it because after all these many years, at last, my Oscar has been returned to me.

In February 1960, O'Brien was honored with two stars on the Hollywood Walk of Fame, one for motion pictures at 6606 Hollywood Boulevard, and one for television at 1634 Vine St. In 1990, O'Brien was honored by the Young Artist Foundation with its Former Child Star "Lifetime Achievement" Award recognizing her outstanding achievements within the film industry as a child actress. In 2006, she was presented with a Lifetime Achievement Award by the SunDeis Film Festival at Brandeis University.

She has been married twice, to Harold Allen, Jr. from 1959 to 1968, and later to Roy Thorsen. The latter marriage produced her only child, Mara Tolene Thorsen, born in 1977.

All content from Kiddle encyclopedia articles (including the article images and facts) can be freely used under Attribution-ShareAlike license, unless stated otherwise. Cite this article:
Margaret O'Brien Facts for Kids. Kiddle Encyclopedia.