Allyson began her career in 1937 as a dancer in short subject films and on Broadway in 1938. She signed with MGM in 1943, and rose to fame the following year in Two Girls and a Sailor. Allyson's "girl next door" image was solidified during the mid-1940s when she was paired with actor Van Johnson in five films.

In 1951, she won the Golden Globe Award for Best Actress for her performance in Too Young to Kiss. From 1959 to 1961, she hosted and occasionally starred in her own anthology series, The DuPont Show with June Allyson, which aired on CBS.

In the 1970s, she returned to the stage starring in Forty Carats and No, No, Nanette. In 1982, Allyson released her autobiography June Allyson by June Allyson, and continued her career with guest starring roles on television and occasional film appearances.

She later established the June Allyson Foundation for Public Awareness and Medical Research and worked to raise money for diseases affecting senior citizens. During the 1980s, Allyson also became a spokesperson for Depend undergarments, in a successful marketing campaign that has been credited in reducing the debilitating social stigma of incontinence. She made her final onscreen appearance in 2001.

Allyson was married four times (to three husbands) and had two children with her first husband, Dick Powell. 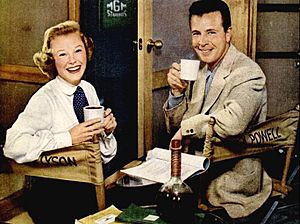 Allyson was born Eleanor Geisman, nicknamed "Ella", in the Bronx, New York City. In April 1918 (when Allyson was six months old), her father abandoned the family. Allyson was brought up in near poverty, living with her maternal grandparents. To make ends meet, her mother worked as a telephone operator and restaurant cashier. When she had enough funds, she would occasionally reunite with her daughter, but more often Allyson was "farmed" out to her grandparents or other relatives.

In 1925 (when Allyson was eight), a tree branch fell on her while she was riding on her tricycle. Allyson sustained a fractured skull and broken back. Her doctors said she would never walk again and confined her to a heavy steel brace from neck to hips for four years, she ultimately regained her health, but when Allyson had become famous, she was terrified that people would discover her background from the "tenement side of New York City", and she readily agreed to studio tales of a "rosy life" including a made up story that she underwent months of swimming exercises in rehabilitation to emerge as a star swimmer. 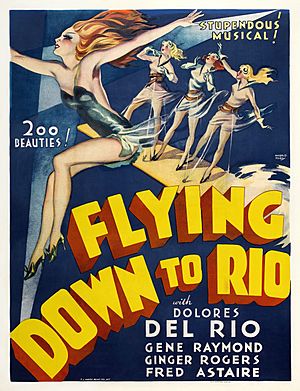 June was inspired by Ginger Rogers and Fred Astaire movies

After gradually progressing from a wheelchair to crutches to braces, Allyson's true escape from her impoverished life was to go to the cinema, where she was enraptured by Ginger Rogers and Fred Astaire movies. As a teen, Allyson memorized the trademark Ginger Rogers dance routines. She also tried to copy the singing styles of movie stars although she never mastered reading music. When the family was reunited with a more stable financial standing, Allyson was enrolled in the Ned Wayburn Dancing Academy and began to enter dance competitions with the stage name of "Elaine Peters".

She left high school after completing two and half years, to seek jobs as a dancer. Her first $60-a-week job was as a tap dancer at the Lido Club in Montreal. Returning to New York, she found work as an actress in movie short subjects filmed by Educational Pictures at its Astoria, Long Island, studio. Her first career break came when Educational cast her opposite singer Lee Sullivan, comic dancers Herman Timberg, Jr., and Pat Rooney, Jr., and future comedy star Danny Kaye. When Educational ceased operations, Allyson moved to Vitaphone in Brooklyn and starred or co-starred (with dancer Hal Le Roy) in musical shorts.

Following hip-replacement surgery in 2003, Allyson's health began to deteriorate. With her husband at her side, she died July 8, 2006, aged 88 at her home in Ojai, California. Her death was a result of pulmonary respiratory failure and acute bronchitis. On her death, Kimberly-Clark Corporation (NYSE: KMB) contributed $25,000 to the June Allyson Foundation to support research advances in the care and treatment of women with urinary incontinence. 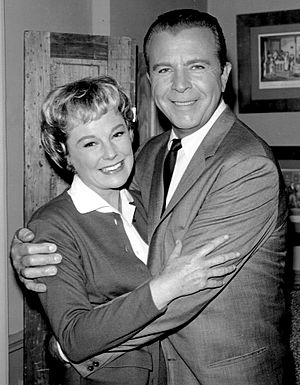 All content from Kiddle encyclopedia articles (including the article images and facts) can be freely used under Attribution-ShareAlike license, unless stated otherwise. Cite this article:
June Allyson Facts for Kids. Kiddle Encyclopedia.