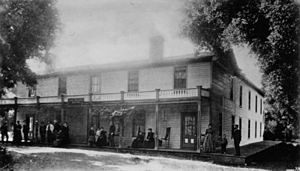 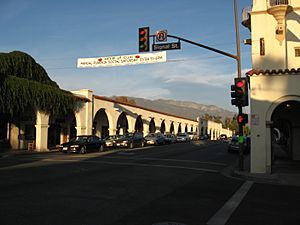 Ojai ( OH-hy; Chumash: ’Awhaỳ) is a city in Ventura County, California. Located in the Ojai Valley, it is northwest of Los Angeles and east of Santa Barbara. The valley is part of the east–west trending Western Transverse Ranges and is about 10 miles (16 km) long by 3 miles (5 km) wide and divided into a lower and an upper valley, each of similar size, surrounded by hills and mountains. The population was 7,637 at the 2020 census, up from 7,461 at the 2010 census.

Ojai is a tourism destination known for its boutique hotels, recreation opportunities, hiking, and farmers' market of local organic agriculture. It has small businesses specializing in local and ecologically friendly art, design, and home improvement. Chain stores are prohibited by city ordinance to encourage local small business development and keep the town unique.

The name Ojai is derived from the Mexican-era Rancho Ojai, which in turn took its name from the Ventureño Chumash word 'Awha'y, meaning "Moon". The city's self-styled nickname is "Shangri-La" referencing the natural environment of this health and spirituality-focused region as well as the mystical sanctuary of the 1937 film adaptation of James Hilton's novel Lost Horizon.

Chumash Indians were the early inhabitants of the valley. They called it Ojai, which derives from the Ventureño Chumash word ʼawhaý meaning "moon". The area became part of the Rancho Ojai Mexican land grant made to Fernando Tico in 1837, and he established a cattle ranch. Tico sold it in 1853 without much success to prospectors searching for oil. By 1864, the area was settled.

The town was laid out in 1874 by real estate developer R.G. Surdam and named Nordhoff, California, in honor of the writer Charles Nordhoff. Leading up to and during World War I, American sentiment became increasingly anti-German. Across the United States, German and German-sounding place names were changed. As part of this trend, Nordhoff was renamed Ojai in 1917.

The main turning point in the development of the city was the coming of Edward Libbey, early owner of the Libbey Glass Company. He saw the valley and fell in love, thinking up many plans for expansion and beautification of the existing rustic town. A fire destroyed much of the original western-style downtown Nordhoff—Ojai in 1917. Afterwards Libbey helped design, finance, and build a new downtown more in line with the then contemporary taste for Spanish Colonial Revival style architecture. The projects included a Spanish-style arcade along the main street, a bell-tower reminiscent of the famous campanile of the Basilica Menor de San Francisco de Asis in Havana, and a pergola opposite the arcade.

To thank Libbey for his gifts to the town, the citizens proposed a celebration to take place on March 2 of each year. Libbey declined their offer to call it "Libbey Day", and instead suggested "Ojai Day". The celebration still takes place each year in October. The arcade and bell tower still stand, and have come to serve as symbols of the city and the surrounding valley. Libbey's pergola was destroyed in 1971, after being damaged in an explosion. It was rebuilt in the early 2000s to complete the architectural continuity of the downtown area.

The Taormina neighborhood was established as the first historic district in the city in 2016. The housing development was built in the style of French architecture of Normandy in the 1960s and 1970s by members of the Theosophy movement adjacent to the Krotona Institute of Theosophy. Taormina’s founder, theosophist Ruth Wilson, envisioned the development as a retirement community for fellow theosophists but in the early 1980s a court ruling required the community to be open to residents of all faiths and backgrounds.

Ojai is situated in a small east-west valley, north of Ventura and east of Santa Barbara. It is approximately 15 miles (24 km) inland from the Pacific Ocean coast. Nordhoff Ridge, the western extension of the Topatopa Mountains, towers over the north side of the town and valley at more than 5,000 feet (1,500 m). Sulphur Mountain creates the southern ranges bounding the Ojai Valley, a little under 3,000 feet (910 m) in elevation. The Sulphur and Topatopa Mountains are part of the Transverse Ranges system. The Ojai Valley and the surrounding mountains are heavily wooded with oak trees.

The Ventura River flows through the Ventura River Valley, draining the mountains surrounding Ojai to the north and east and emptying into the Pacific Ocean at the city of Ventura. The Ventura River was once known for its steelhead fishing before Matilija Dam and Lake Casitas were constructed, eliminating habitat for this trout species.

The climate of Ojai is Mediterranean, characterized by hot, dry summers, sometimes exceeding 100 °F (38 °C), and mild winters, with lows at night sometimes below freezing. As is typical for much of coastal southern California, most precipitation falls in the form of rain between the months of October and April, with intervening dry summers. 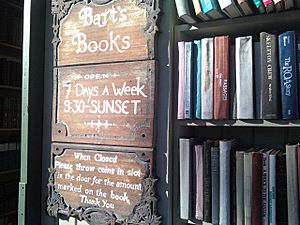 Ojai's culture is heavily focused on ecology, health and organic agriculture, walking/hiking, spirituality, music and local art. It is often seen as a hippie-friendly city, and many New Age shops exist. The benign climate has also fostered subcultures devoted to driving and exhibiting classic cars and there are several motorcycle clubs that regularly tour through Ojai as well. On July 8, 1999, former Apollo astronaut Pete Conrad, one of the twelve men who walked on the moon, died of injuries suffered from a motorcycle accident in Ojai.

The Ojai Music Festival (founded in 1947) is an annual festival of performances by some of the world's top musicians and composers, and occurs on the first weekend after Memorial Day. Notable appearances include Igor Stravinsky, Aaron Copland, Esa-Pekka Salonen and Pierre Boulez, who was festival director in 2003. The outdoor bookshop Bart's Books, subject of news programs and documentaries, has been in Ojai since 1964. Ojai is home to the annual Ojai Playwrights Conference, a two-week playwrights festival that brings professional writers and actors from across the country to Ojai. The community is served by The Ojai and Ventura VIEW, Ojai Valley News and The Ojai Post.

The script for the movie Head was written in Ojai by The Monkees, Jack Nicholson and Bob Rafelson.

Ojai is the setting for the 2010 comedy film Easy A (much of which was shot on location), and for part of Michael Scott's book The Alchemyst: The Secrets of the Immortal Nicholas Flamel. Ojai is the location of the fruit orchards of the fictional Ojai Foods, central to the conflict and drama of the Walker family in the ABC series Brothers & Sisters.

The title characters of TV series The Bionic Woman and The Six Million Dollar Man (Jaime Sommers and Col. Steve Austin) are described in the series as having been childhood sweethearts in Ojai, and a number of episodes from both series take place in Ojai and its vicinity. 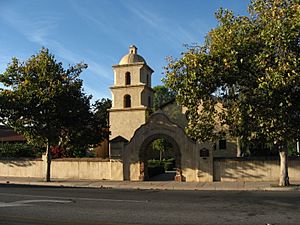 The town of Ojai and its surrounding area is home to many recreational activities. Los Padres National Forest borders the town on the north, and many back country areas within the forest are accessible from Highway 33, the major north–south highway through town. Matilija Creek is a spot to enjoy splashing under waterfalls, backpacking, and soaking in a hot spring. To the west, the Lake Casitas Recreation Area offers camping, picnicking, and hiking as well.

Annually, in early April, the town hosts a bicycle race that draws professional and amateur teams from around the country. The "Garrett Lemire Memorial Grand Prix" began in 2004 as a tribute to a 22-year-old cyclist from Ojai who died racing his bicycle in Arizona the previous year. The race is held on a 1 mile (1.6 km) circuit that circumnavigates Libbey Bowl in the heart of downtown Ojai. Proceeds from event promote cycling safety and education in local schools. Also in April, "The Ojai" tennis tournament is held. It is the oldest tennis tournament west of the Mississippi River (founded in the 1887) and has been an early competition for many players who went on to earn one or more Grand Slam titles.

In early June, often coinciding with the Music Festival, the Ojai Wine Festival is held at Lake Casitas. Over 3,000 wine lovers sample the products of over 30 wineries. Proceeds go to charity. 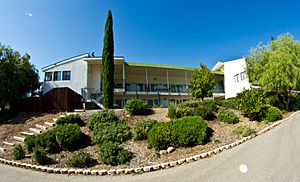 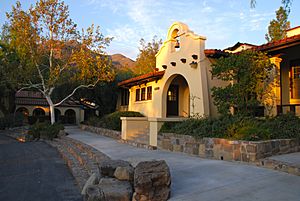 Old Main at the Thacher School

The Ojai Valley is home to several private boarding schools:

In 2013, a plan to take over the private water system was approved by voters. Up to $60 million in bonds would be issued and a special tax district would be formed. This was approved by almost 90 percent of voters but it was tied up in court by the private water purveyor, Golden State Water Company. Casitas Municipal Water District took over management of the Ojai water system by purchase of the franchise from Golden State Water Company in April 2017. The Ojai Valley Sanitary District treats the sewage from the city and surrounding areas. In 2020, the city banned new hook-ups to natural gas except for restaurants and pools. 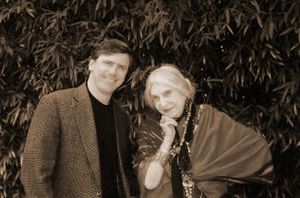 All content from Kiddle encyclopedia articles (including the article images and facts) can be freely used under Attribution-ShareAlike license, unless stated otherwise. Cite this article:
Ojai, California Facts for Kids. Kiddle Encyclopedia.