Zhao gained further success with Nomadland (2020), which attracted international recognition and won many awards, including Best Director at the Golden Globe Awards, Directors Guild of America Awards, and British Academy Film Awards—making Zhao the second woman and first Asian woman to win the category at each awards body— the Golden Lion at the Venice Film Festival, and the People's Choice Award at the Toronto International Film Festival. In 2021, Nomadland won Best Picture and Zhao won Best Director at the 93rd Academy Awards for Nomadland, becoming the first woman of color and second woman to do so.

Zhao has recently ventured into blockbuster filmmaking with the Marvel Cinematic Universe superhero film Eternals, slated for release in November 2021.

Zhao was born Zhào Ting in Beijing in 1982. Her father is Zhào Yuji, who rode the wave of China’s industrialization to great success, first as a top executive at one of the country’s largest steel companies, Shougang Group, and later in real-estate development and equity investment. Her mother was a hospital worker who was in a People's Liberation Army performance troupe. Vogue said she described herself as "a rebellious teen, lazy at school" who drew manga and wrote fan fiction. She loved films growing up, especially Happy Together by Wong Kar-wai. When she was 15 years old, despite knowing nearly no English, her parents sent her to Brighton College, a private boarding school in the United Kingdom.

Her parents separated, and her father later married comic actress Song Dandan, whom Zhao had grown up watching on television. Growing up, Zhao was drawn to influences from Western pop culture. After attending the boarding school in England, she moved to Los Angeles to finish high school.

In 2015, Zhao directed her first feature film, Songs My Brothers Taught Me. Filmed on location at the Pine Ridge Indian Reservation in South Dakota, the film depicts the relationship between a Lakota Sioux brother and his younger sister. The film premiered as part of the U.S. Dramatic Competition at Sundance Film Festival. It later played at Cannes Film Festival as part of the Director's Fortnight selection. The film was nominated for Best First Feature at the 31st Independent Spirit Awards.

In 2017, she directed The Rider, a contemporary western drama which follows a young cowboy’s journey to discover himself after a near-fatal accident ends his professional riding career. The film was executive produced by her father, Yuji Zhao. Similar to her first feature, Zhao utilised a cast of non-actors who lived on the ranch where the film was shot. Zhao's impetus for making the film came when Brady Jandreau—a cowboy whom she met and befriended on the reservation where she shot her first film—suffered a severe head injury when he was thrown off his horse during a rodeo competition. Jandreau later starred in the film playing a fictionalised version of himself as Brady Blackburn. 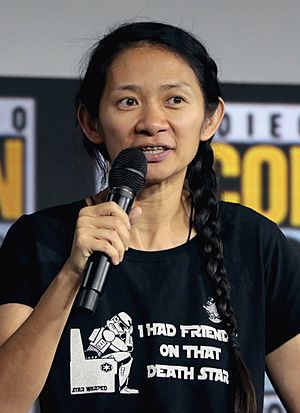 The film premiered at Cannes Film Festival as part of the Directors' Fortnight selection and won the Art Cinema Award. The film earned her nominations for Best Feature and Best Director at the 33rd Independent Spirit Awards. At the same ceremony, Zhao became the inaugural winner of the Bonnie Award, named after Bonnie Tiburzi, which recognizes a mid-career female director. The film was released on April 13, 2018 by Sony Pictures Classics and was critically acclaimed. Peter Keough of The Boston Globe wrote: "[The film] achieves what cinema is capable of at its best: It reproduces a world with such acuteness, fidelity, and empathy that it transcends the mundane and touches on the universal."

In 2018, Zhao directed her third feature film, Nomadland, starring Frances McDormand. The film was shot over four months traveling the American West in an RV with many actual nomadic workers. The film premiered at the Venice Film Festival, where it received critical acclaim and won the Golden Lion award, and subsequently played at the 2020 Toronto International Film Festival, where it won the People's Choice Award. The film was released on February 19, 2021 by Searchlight Pictures. Zhao won the Golden Globe Award for Best Director for Nomadland, making her the first woman of Asian descent honored, and only the second woman to win a Golden Globe for directing since Barbra Streisand in 1984.

On February 15, 2021, Variety reported that "[w]ith 34 awards season trophies for directing, 13 for screenplay and nine for editing, Chloe Zhao has surpassed Alexander Payne (Sideways) as the most awarded person in a single awards season in the modern era."

In April 2018, it was announced that Amazon Studios greenlit Zhao's upcoming untitled Bass Reeves biopic, a historical Western about the first black U.S. Deputy Marshal. Zhao is set to direct the film and write the screenplay. In September 2018, Marvel Studios hired her to direct Eternals, based on the comic book characters of the same name. The film is set to be released on November 5, 2021.

Zhao cites Wong Kar-wai's romance Happy Together (1997) as the "film that made me want to make films". She was also influenced by Spike Lee who was her film professor while she studied at New York University's Tisch School of the Arts. She cited Ang Lee as an influence as well saying, "Ang Lee’s career has been very inspiring to me — how he’s able to bring where he comes from to all the films that he makes". She also has mentioned Werner Herzog and Terrence Malick as key influences.

Zhao resides in Ojai, California with three chickens and two dogs, and her partner and cinematographer, Joshua James Richards.

All content from Kiddle encyclopedia articles (including the article images and facts) can be freely used under Attribution-ShareAlike license, unless stated otherwise. Cite this article:
Chloé Zhao Facts for Kids. Kiddle Encyclopedia.